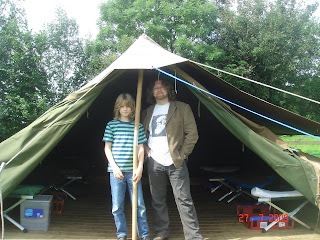 Some journalists may not be behind Camp Quest UK but the majority of the public seem to be.

As I write this blog, my children are away at the first ever Camp Quest UK. I’m still somewhat perplexed at the media storm the camp seems to have generated. Today for example we had this update from The Guardian, and this piece from The Daily Mail.

I spoke to Zoe Brenan, the author of the article in today’s Daily Mail, briefly whilst coming home on the train a few weeks ago. In order to try and stir up a bit of controversy or pander to what she perceives as the faithful majority, she's opted for the “Should we be worried what these atheists are up to?” angle.

It’s a fairly lengthy piece that includes a couple of quotes from this blog and the information presented seems pretty accurate, what I found somewhat irksome however was the fact the Zoe seemed to be trying to raise a rabble of Christian apologists against Camp Quest. Believers cages are notoriously easy to rattle and therefore an easy angle to court controversy, but I suspect that Zoe has misjudged the general British opinion.

Looking at the comments left by readers on the online version of the article, numerous people have left messages in support of the rational and scientific approach of Camp Quest. I know a snapshot of a small uncontrolled straw poll is not necessarily and accurate summary of the public perspective, but nonetheless I decided to analyse the comments to gain a quick summary of the overall opinions of the readers.

The comment facility on the Mail Online allows readers to rate all comments with a "thumbs up" agree, or a "thumbs down" disagree. This gives each comment a positive or negative score in support of, or disagreeing with the comment. I sorted all of the comments in a spreadsheet into 2 categories, those offering support and agreement with the Camp Quest philosophy, and those criticising or giving negative comments about the camp. I then added up the total positive and negative votes in each category to give an overall total of the votes cast in favour, or against each type of comment.

The graph below shows the results with a net 2,276 thumbs up in support of the positive comments for Camp Quest and a net result of 426 thumbs down disagreeing with the negative comments about Camp Quest. 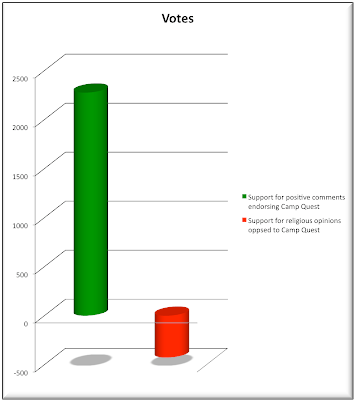 Nice. I've been more or less (mostly less I suppose) following this and it seems that you're doing good work. As for the poll, as unscientific as it may be, I'd say your assertion is correct. My opinion is that people who vote on articles and leave comments are usually the ones with stronger convictions about the topic. My experience backs up your feeling that the believers are the ones easiest to rile up and typically flood the comments on anything that threatens their precious beliefs.

Thanks for posting the Roger Bolton interview on Sunday. I never heard it before. Boy does he have naive notions about knowledge,beliefs, love, imagination - I wish I had had a go at him.
Best
Bruce