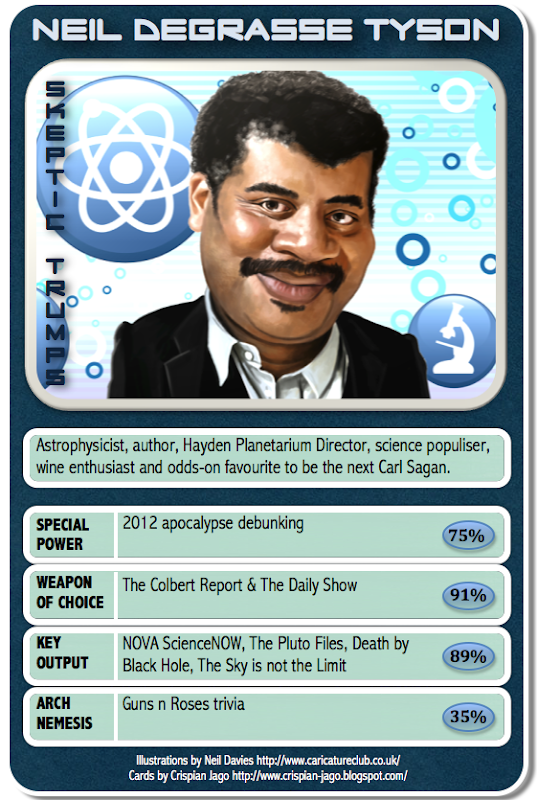 Click Here for the full deck of cards
Get your own personalised caricature by Neil Davies
Posted by Crispian Jago at Thursday, July 22, 2010 3 comments:

Reflections on the Periodic Table of Irrational Nonsense

As the unofficial jester to the court of skepticism, I generally play to a restricted audience. This blog is therefore primarily read by members of the skeptical community and a small subset of people who actively profess a rational approach to the understanding of the universe including Jack of Kent, a couple of nice witches and my mum. *waves*

It’s therefore most gratifying when a post escapes the confines of the skeptical community and tries to make its way in the wider world. This will inevitably generate feedback and comments from a more diverse and therefore less accepting audience.

I don’t plan on being goaded into replying to all the comments received, in that direction madness surely lies, but this post will hopefully address three of the common points raised.

The criticism that I perhaps have the most sympathy with is that making churlish and derogatory remarks does not necessarily advance the cause of skeptisim. We in the skeptical community are quick to spot logical fallacies and cry “Ad hominem” or “Argument from Authority” at the weak reason of the credulous, and I’m not blind to these shortcomings in many of my own posts.
Indeed the primary rebuttal for irrational claims should be made by those equipped with the scientific skills to empirically and logically refute such nonsense (if indeed non bias investigation proves it to be so).

Nonetheless, we must play to our individual strengths and I flatter myself to believe that ridicule (nothing to be proud of), is mine. Although it lacks the rationalism of the scientific method, ridicule can often highlight the hidden laughable aspects of irrational beliefs to the previously disinterested and hopefully enthuse them to seek more reliable evidence.

A perfect example of this is the Mitchell & Webb homeopathy sketch. I’m also rather fond of this quote from Thomas Jefferson’s on the subject:

"Ridicule is the only weapon which can be used against unintelligible propositions. Ideas must be distinct before reason can act upon them; and no man ever had a distinct idea of the trinity. It is the mere Abracadabra of the mountebanks calling themselves the priests of Jesus."

People also suggested many other irrational nonsensical beliefs that would have been quite at home on my table. There were also many other pieces of nonsense in my original draft that failed to make the cut, which admittedly defeats the whole notion of using a periodic table supposedly containing a definitive taxonomy of items, but that quite clearly, wasn’t the point.

In the end, the items that made the table were merely an arbitrary personal selection of nonsense that I find particularly irksome, had good comic value or I simply wanted to draw attention to.

Religions were always planned for inclusion in the table as part of the idea of the post was to show socially accepted beliefs on a par with the truly ludicrous in order to deliberately highlight that their prevalence and demanded respect, acquire them no more integrity.

The actual religions used in the table were therefore primarily selected by simply choosing the most popular ones (by number of claimed followers). Although I did ponder for a while with Shinto and Buddhism, which may be seen more as cultural philosophies than religions.

I see nothing nonsensical in celebrating culture and tradition, however I opted to include Buddhism because although it thankfully lacks the supernatural origins of the monotheistic religions, it nonetheless contains enough unscientific concepts, such as rebirth and reincarnation, to afford it a place in the table.

Shinto on the other hand was missed out primarily because of my ignorance of it. I am however an equal opportunities ridiculer and am more than happy to poke a shitty stick at Shinto if suitably armed with evidence of its irrationality.

BTW, I’m thoroughly enjoying the #StupidScientology hashtag currently trending on Twitter. Great fun, and easily the most preposterous of the “religions”.

However, by far the most enjoyable comments were the ones received from people who seemed to find the humour and absurdity in the table right up to the point that they stumbled upon their own sacred cow. To these people, I make no apology; it’s all in there for a reason.
Posted by Crispian Jago at Wednesday, July 21, 2010 22 comments:

The Periodic Table of Irrational Nonsense

I thought I'd try and apply the rational to the irrational, and came up with this. 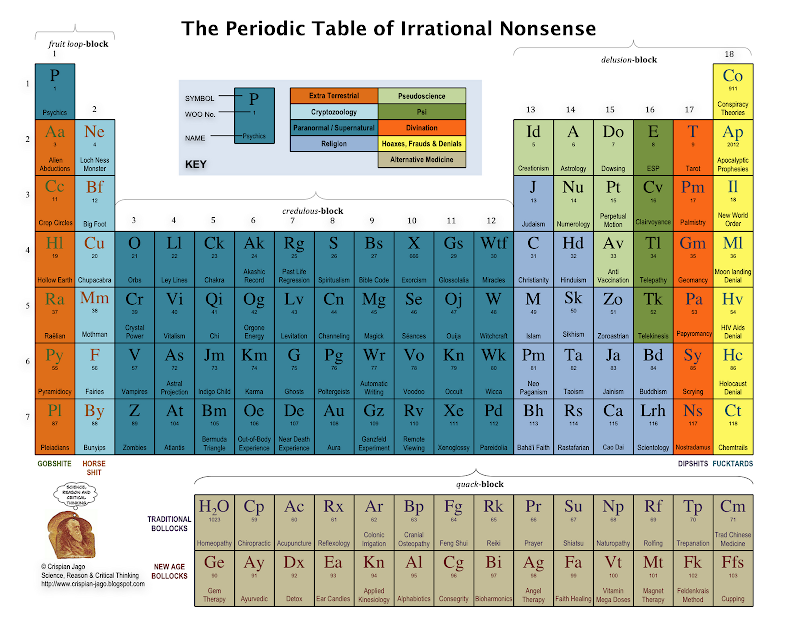 Postscript:
Since originally posting the periodic table of irrational nonsense I have had a number of requests to reproduce the table in different languages and perhaps a sanitised version suitable for schools, so here are a few alternative versions: 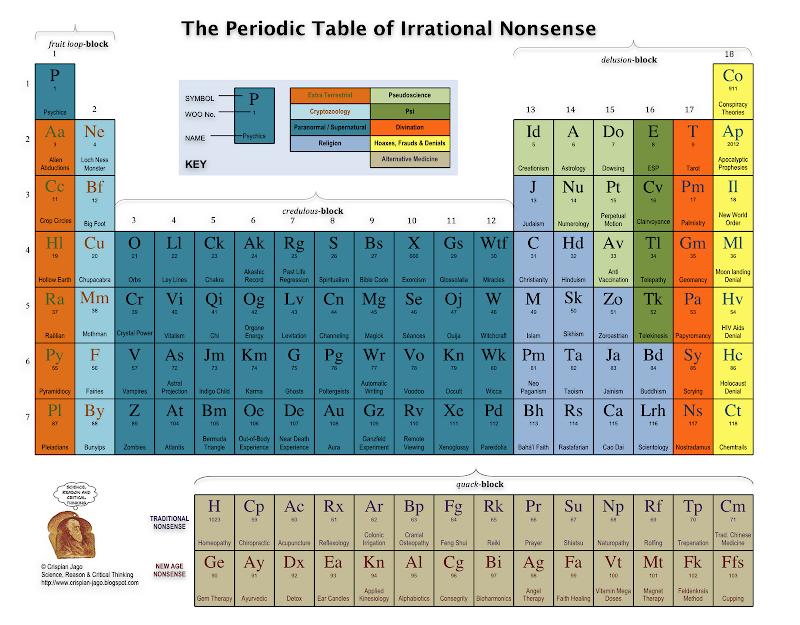 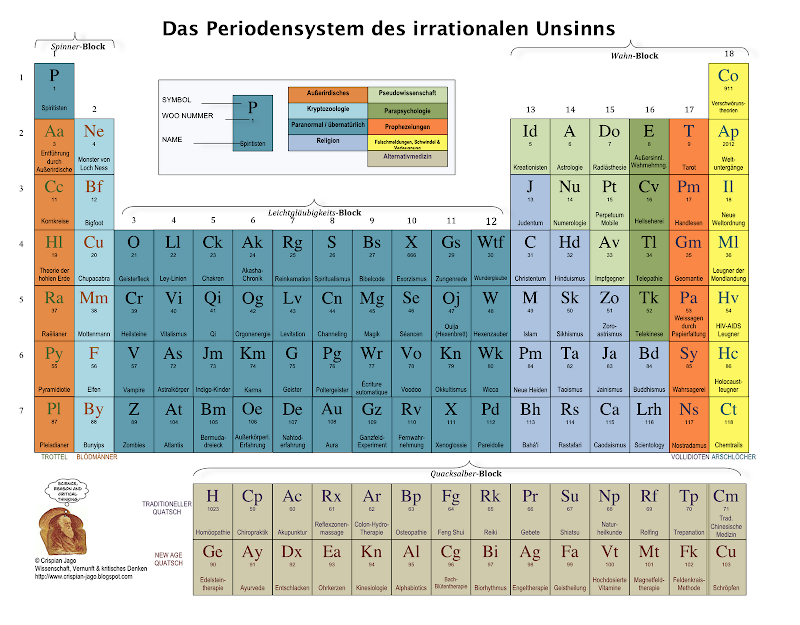 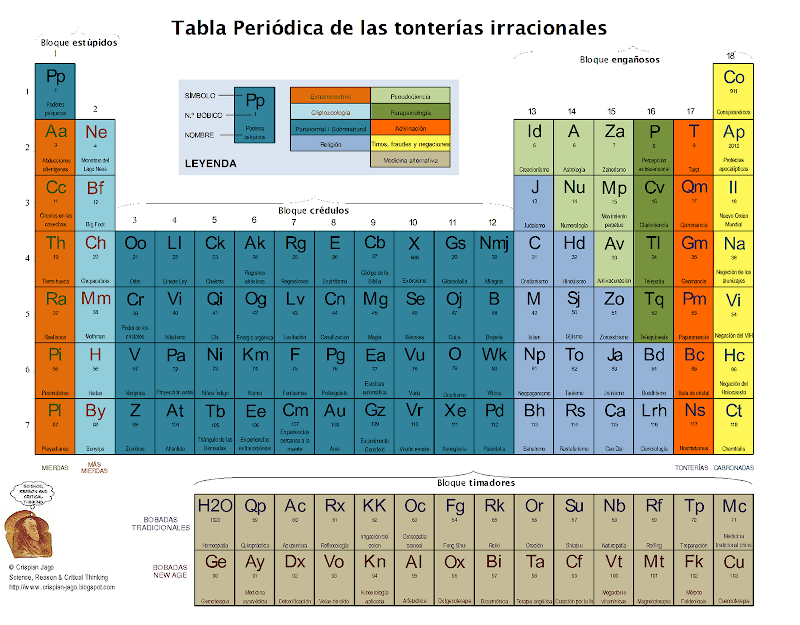 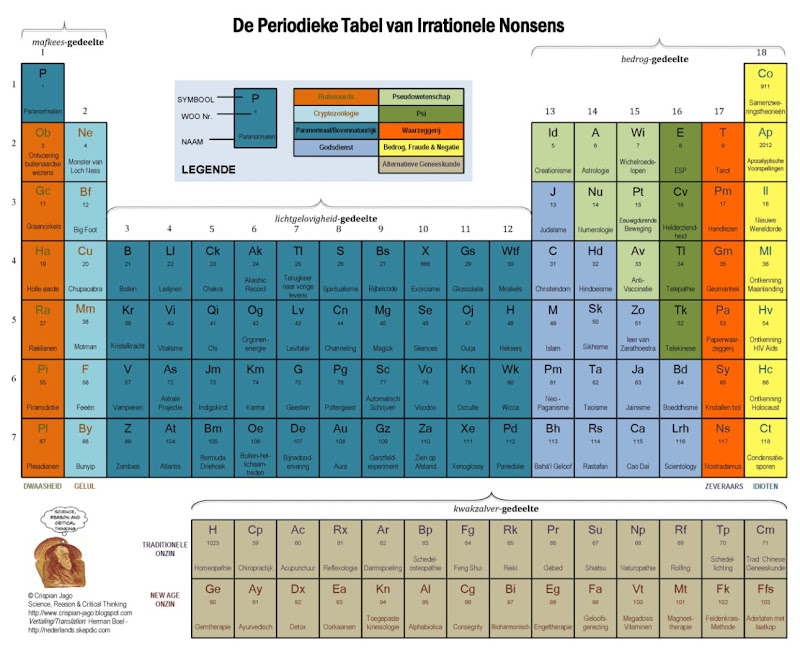 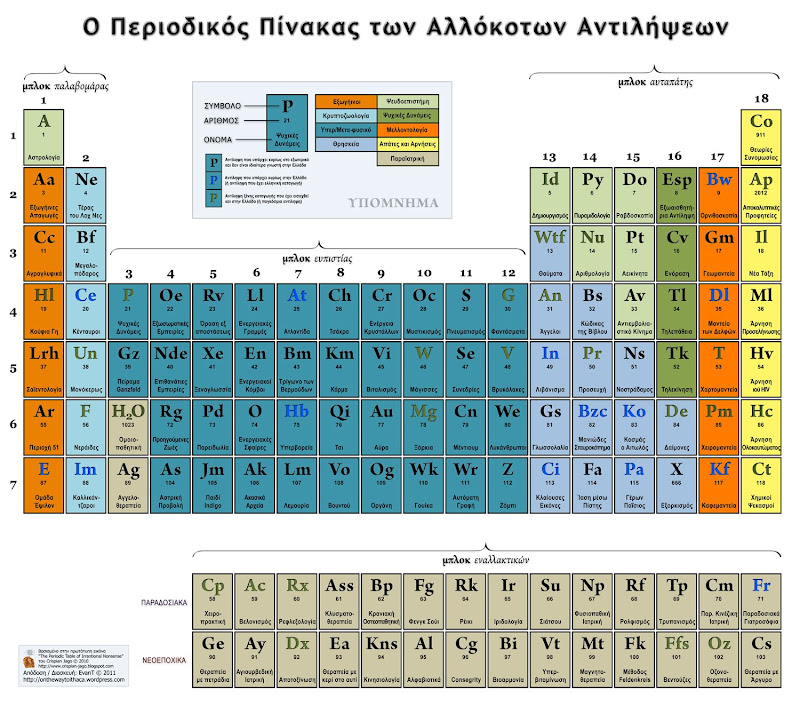 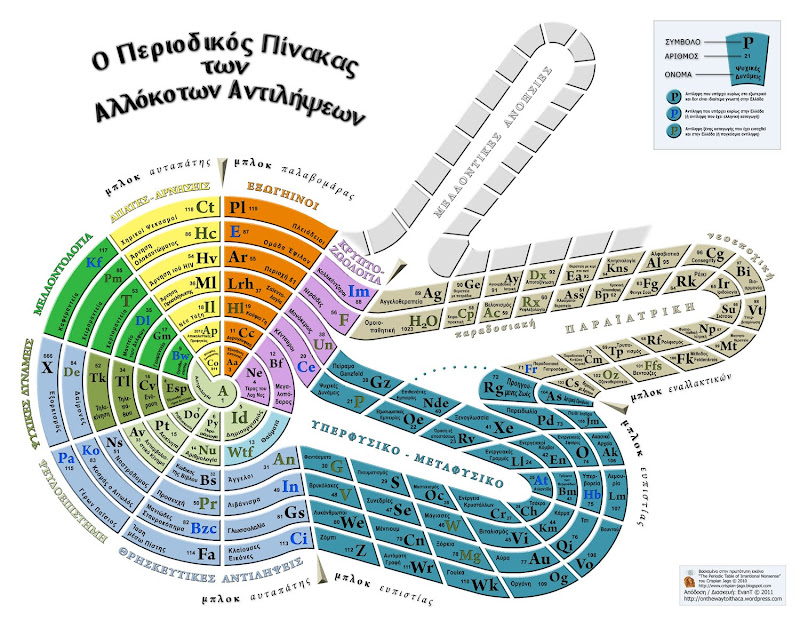 created by Evan T based on my original table 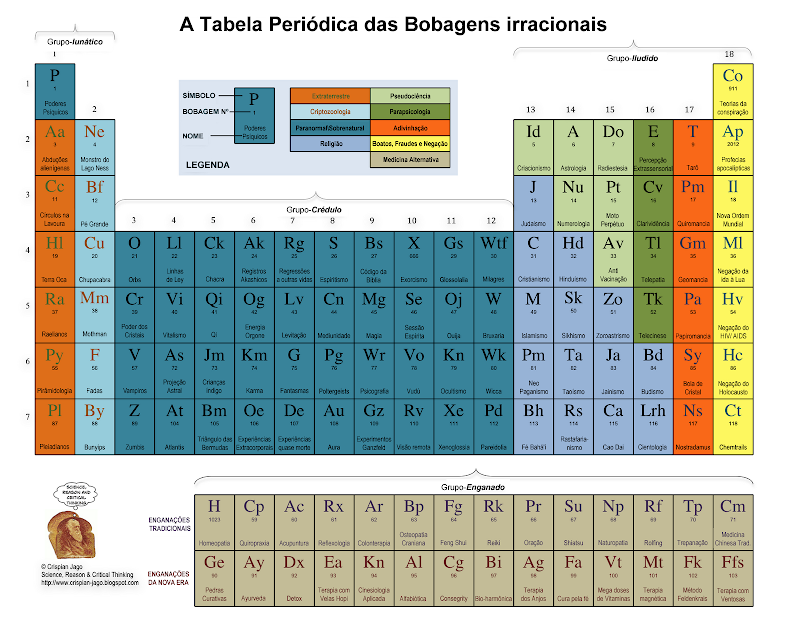 Merchandise
I've also received numerous requests to make the design available on T-Shirts and posters. I initially uploaded the T-Shirt design to RedBubble and CafePress. The Red Bubble T-Shirts came out really well (I ordered one myself), but I got dissapointing feedback from teh CafePress T-Shirts.

Here's a close up of my RedBubble T-Shirt: 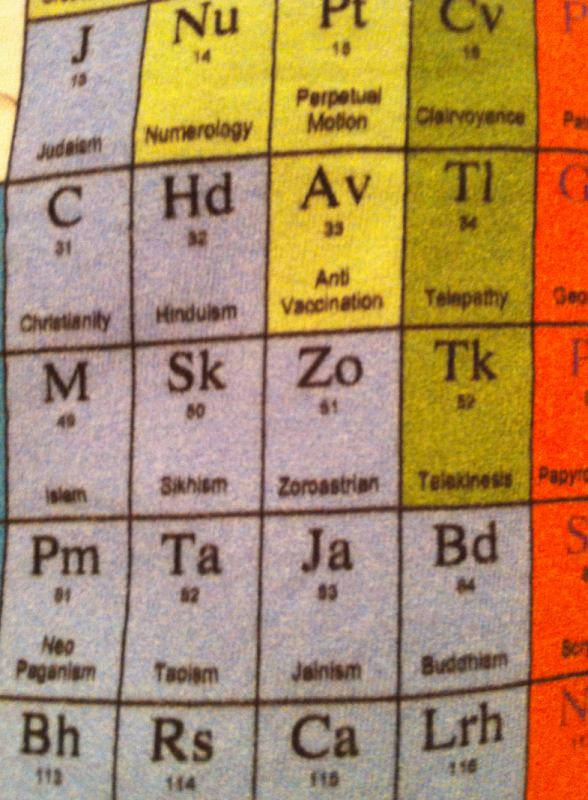 I have now removed the T-Shirts from CafePress and made a few tweaks to the design on RedBubble. (I've increased the font size slightly, removed the shadow text effect and made the colour contrast on the key more distinct), so they should be even better now. I've also uploaded a design with white text that can be printed on a dark T-Shirt.

Or the original Light T-Shirt design:
The posters are still available on CafePress, as I have received only positive feedback comments from people who have ordered the posters: 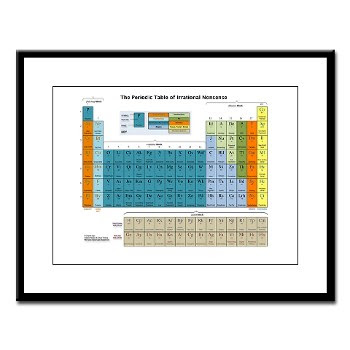 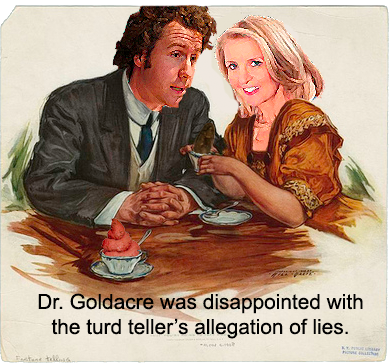 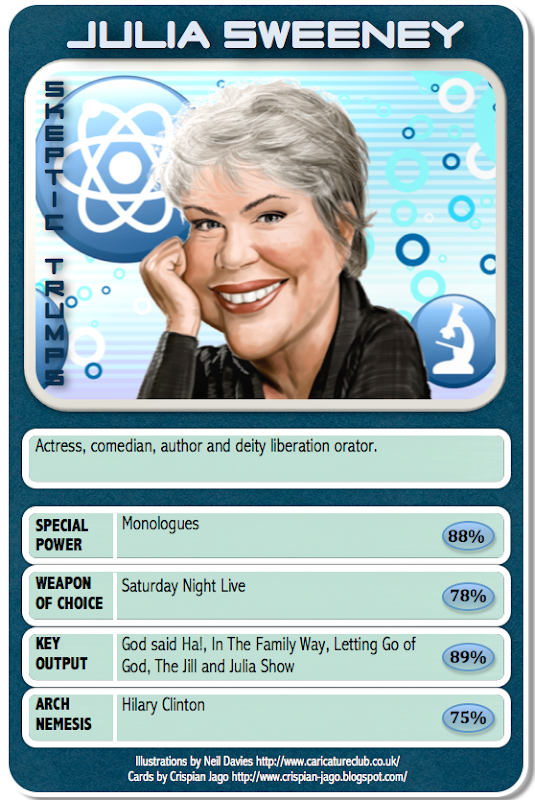 Click Here for the full deck of cards
Get your own personalised caricature by Neil Davies
Posted by Crispian Jago at Wednesday, July 14, 2010 2 comments:

OK, last one. I'll do something different next, honest. 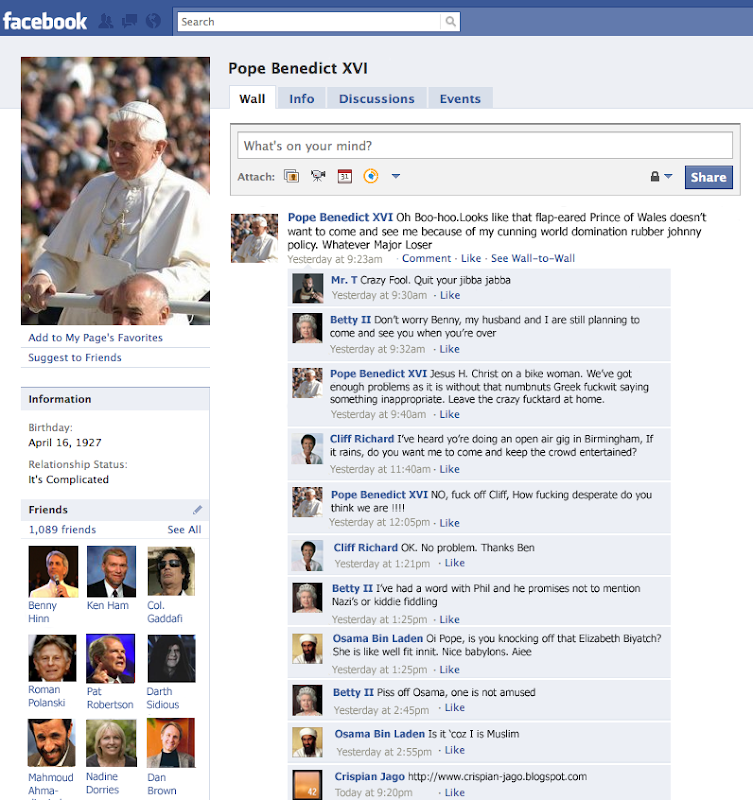 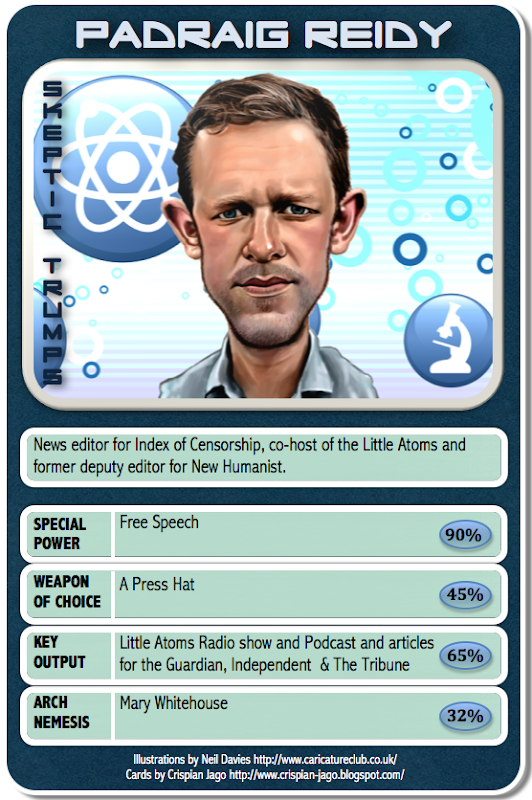 Click Here for the full deck of cards
Get your own personalised caricature by Neil Davies
Posted by Crispian Jago at Friday, July 09, 2010 1 comment:

As luck would have it, I happened upon another papal facebook screenshot. 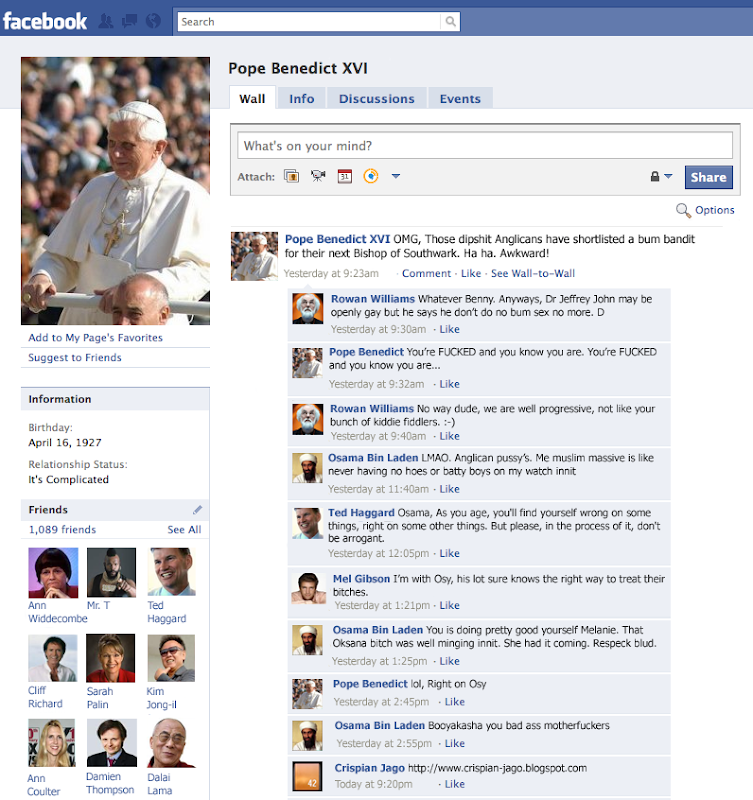 Vatican technicians quickly closed the loophole but not before this exclusive screen-shot of the Pope's private facebook account had been taken. 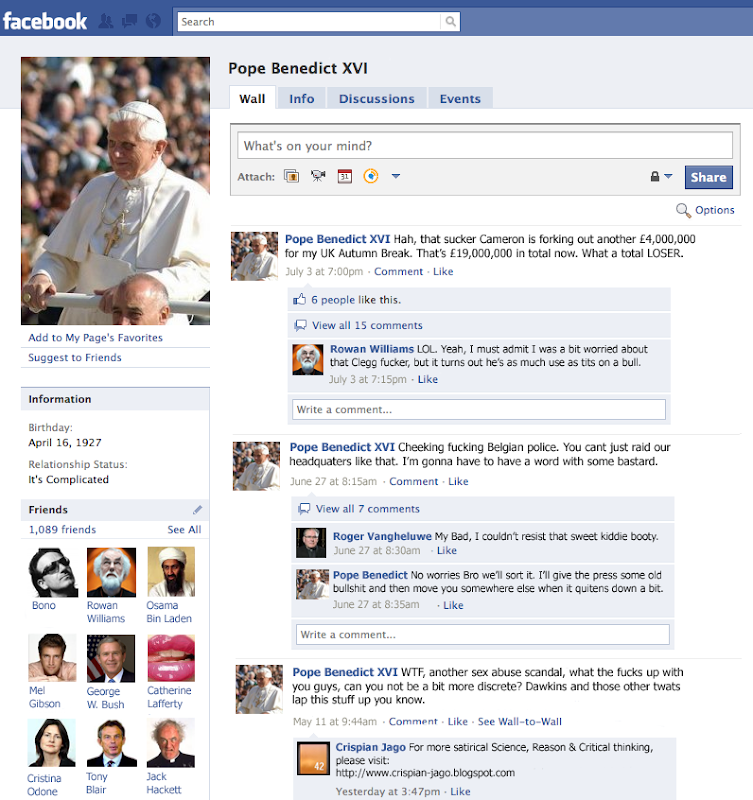 Cowell Accused of Failing to Act on Sex Abuse Case

In a message to music industry executives, Cowell expressed solidarity “in this moment of sadness”.

The Music Industry has admitted that several cases of paedophile musicians have been reported to record label executives during the past 20 years. But it is not known how many musicians have subsequently lost their record deals under Pop Law - or how many have been prosecuted by police.

There has been a wave of allegations in the past few months that music executives failed to deal properly with musicians and singers accused of child sex abuse, sometimes just moving them to new bands.

Simon Cowell himself has been accused of being part of a culture of secrecy, and of not taking strong enough steps against paedophile musicians.

As we now live in a multi-genre musical society and more and more people are choosing not to associate themselves with any musical genre at all, there is a growing voice calling for musicians accused of sex abuses to be simply investigated by the police rather than being dealt with by record label bosses.
Posted by Crispian Jago at Thursday, July 01, 2010 2 comments: