Heaven & Hell: The Board Game


Heaven and Hell is a fun board game for all the family.

To play Heaven & Hell, you will need:

Each player places his counter on the first square. The youngest player roles the die first and moves his counter along the resulting number of squares. Blindly follow the instructions on the squares you land on and and move heavenward or hellhound accordingly along the red or yellow lines.

In fact, come to think of it, not entirely unlike snakes and ladders. 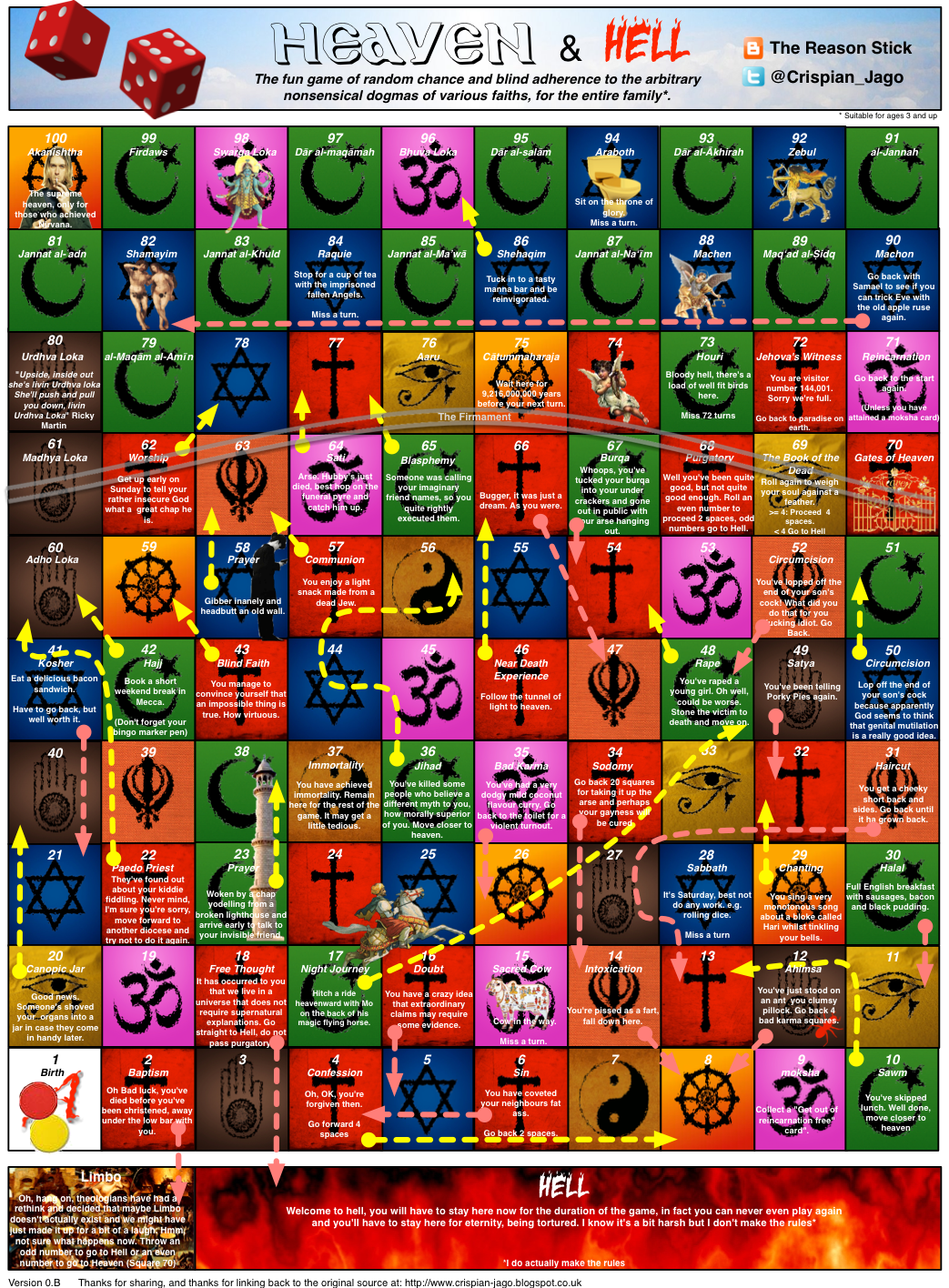 The Conspiracy Theory Flowchart "THEY" Don't Want You To See


Had enough government rhetoric? Tired of following the sheeple? Fed up with believing what THEY want you to believe? Maybe it's time to branch out and discover THE TRUTH.

If you're new to the exciting world of conspiracy theories and just can't decide which paranoid delusion best suits you, then why not use this handy flowchart to find your ideal conspiracy theory. Then you too can go and stick it to THE MAN. 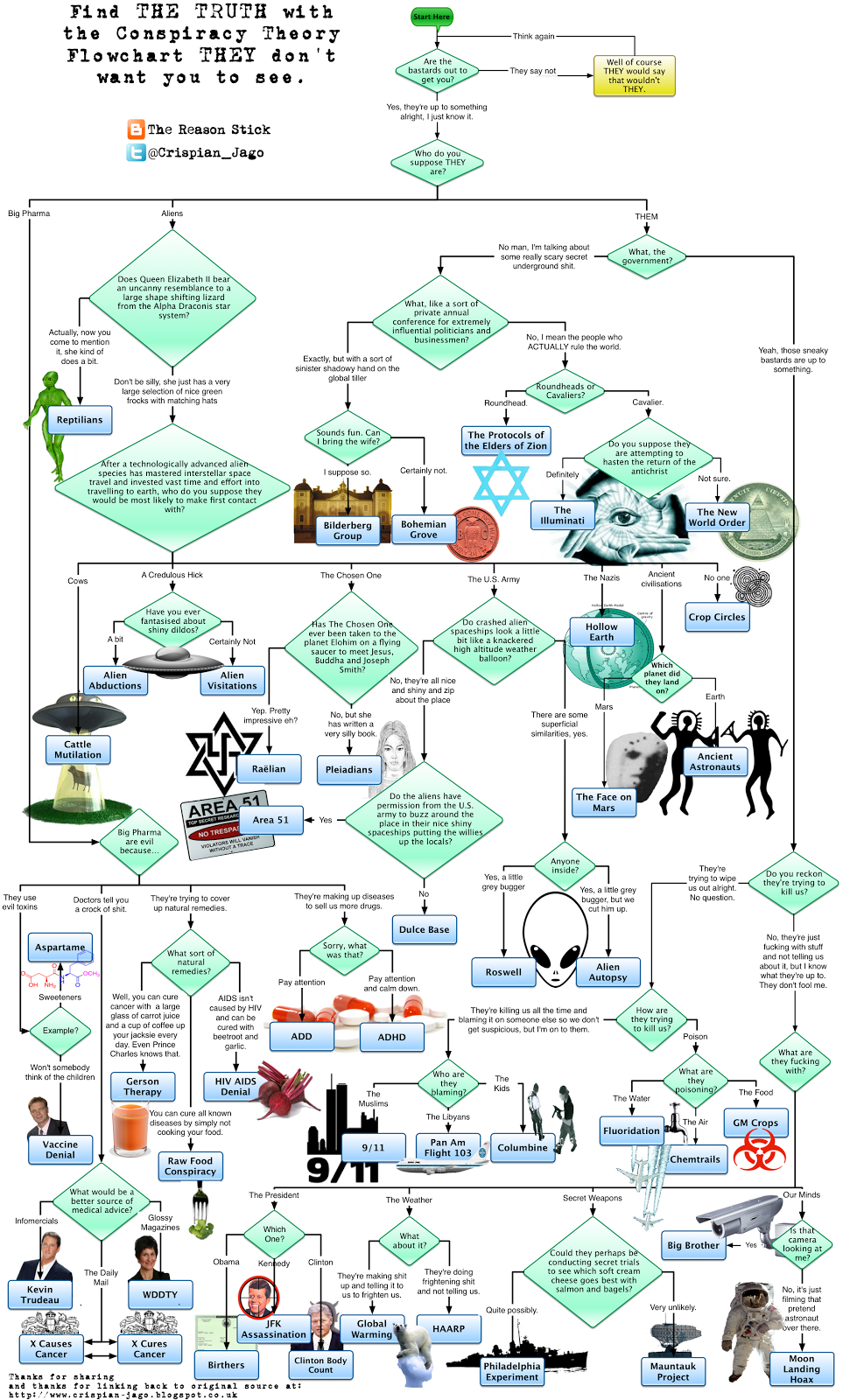 "You know, this explains a lot. Because all my life, I've had this unaccountable feeling in my bones that something sinister was happening in the universe and that no one would tell me what it was." Arthur Dent


NB This is not intended to be a complete list, but please don't let that stop you commenting to let me know what I've missed off :)
Posted by Crispian Jago at Saturday, April 20, 2013 71 comments:


The Church of England's General Synod may be regarded by many as a traditional, slow, bureaucratic and outdated vehicle that  habitually fails to move the Church of England forward into the modern era and reflect current thinking, morals and values.

To this end I propose they take some lessons learnt from Jeremy Clarkson and install a Cool Wall in the General Synod. 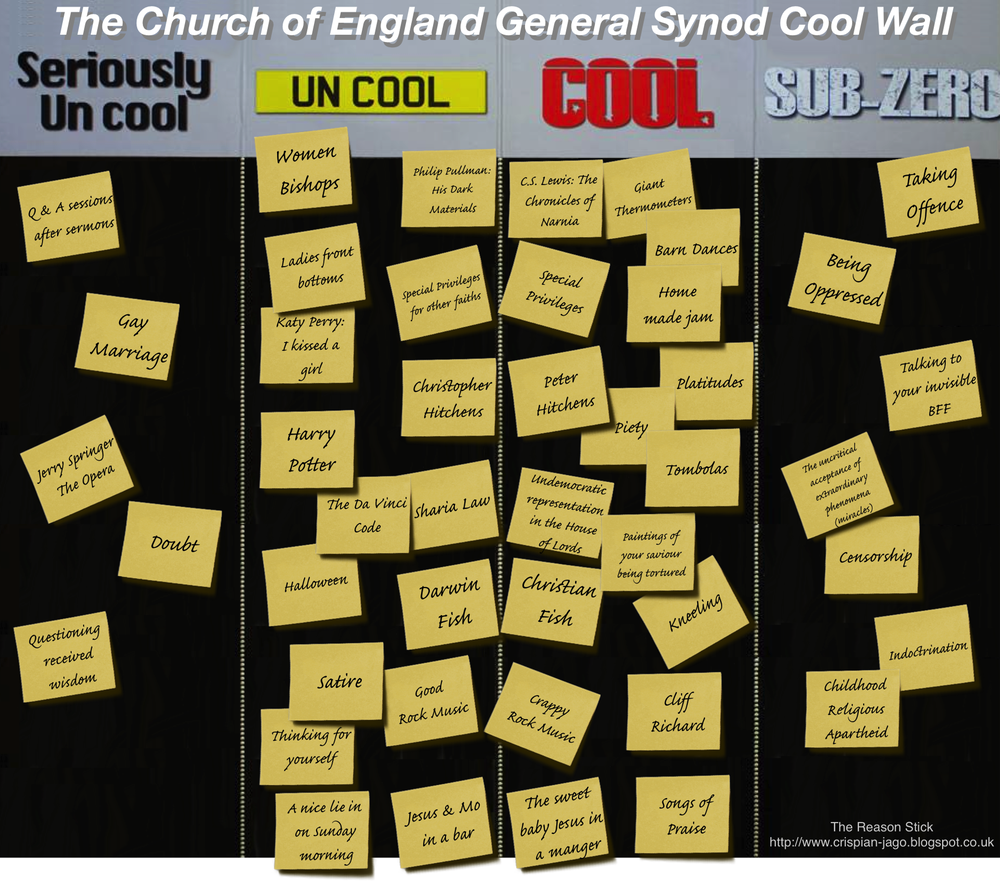 Could be worse, at least I can agree with them about The Da Vinci Code & home made jam.
Posted by Crispian Jago at Monday, April 15, 2013 1 comment:


When things are going a bit shit, the religious minded can always gain a little solace in the firm belief that it's all just part of God's Plan.

This of course raises the question. "Is God really programme managing an intricate series of tasks, activities and dependencies allocated to over 7 billion resources?" If so, I'll wager it's far too complex to just wing it. Furthermore, God has always struck me as the sort of guy who would use a PC rather than a Mac, so he's bound to have it all planned out somewhere on a nice neat resource levelled Microsoft Project Plan. (Assuming of course that the heavenly finance department have authorised a license for him, they're not cheap you know)

So, by utilising a previously discovered breach in the Vatican firewall, I was able to hack into God's PC and search through the unbelievable amount of filth he's been downloading and eventually locate the .mpp file he's been using to manage this curious project. The good news is that believe it or not, God does actually have a plan, the bad news is that it's a little high-level. Having read it, I would certainly recommend a more proactive approach to life rather than putting too much faith in this sordid little plan. 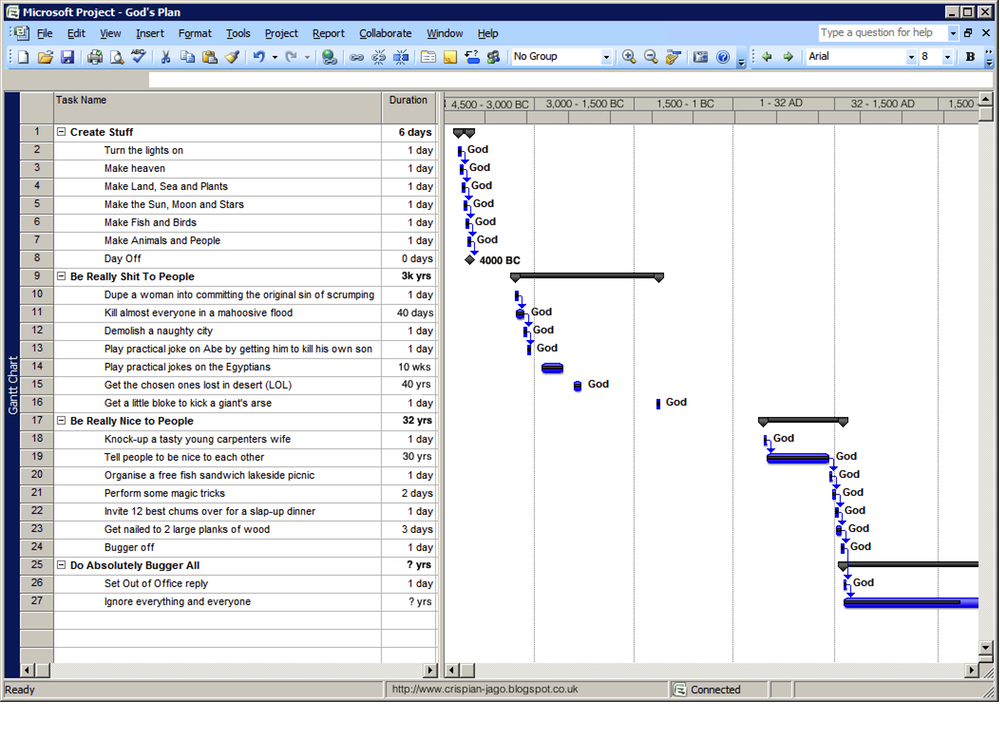 BTW, he has a rather lengthy Risk Register Spreadsheet too but the mitigation column just has the same entry for each risk: "Move in mysterious ways". 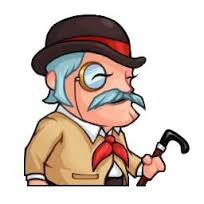 The problem with a nice trip to Bongo Bongo land, in addition to not being able to get hold of a copy of today's Daily Mail, is that invariably Johnny Foreigner is just to damn bone idle to learn the Queen's English.

There are of course numerous web translation services that will translate English into the various dialects of gobbledegook spoken by foreigners. However, these translators are a little clumsy as one must select the name of the particular gibberish spoken by the foreigner and secondly the translation produced is frequently unpronounceable.

This problem has been cleverly solved by the Universal English Translator. Simply enter the phrase you wish to communicate to the little foreign bugger and press the "Translate to Universal English" button to produce a universal phrase that is understandable by any form of dirty foreigner.