It’s a good job that established religions were delivered to humanity in a divinely dictated manual and not just made up to suit the personal agendas of self appointed ancient do-gooders.

Imagine the ignorant prejudices, fears and superstitions that would be embedded in current culture and tradition if that were not the case.

We may well have ended up a couple of thousands years down the line with ceremonies, rituals and hierarchies that proudly discriminate on the grounds of gender and sexuality established on the mere thoughtless whim of our more charismatic ancestors and upheld by their subsequent administrators keen to maintain their unquestionable power and authority.

It is therefore most reassuring to comfort ourselves with the knowledge that the alleged sexuality chauvinism of our cherished marriage ritual is in fact the perceived will of a disinterested supernatural deity and not just a parochial remnant of Bronze Age thinking.

This being the case it is no surprise that the conservative wing of the Church of England seem so anxious to cling to a status quo that looks a tad untenable to 21st century liberal minds. Although their Church officially rolled over and conceded both geocentricism and evolution by natural selection, the remaining hardcore of staunch religionists are keen to ensure that their Church remains the last official bastion of unashamed homophobia.

After gathering their thoughts in an attempt to justify their traditionalist stance they have opted instead to answer the current wave of unwanted secular coercion with alarmist threats of implosion, apparently completely failing to anticipate the retorted secular chorus of “Bring it on”.
Posted by Crispian Jago at Thursday, June 14, 2012 2 comments:

You wouldn’t believe (I hope), the amount of folks there are living in the centre of the earth. Over the centuries numerous fallacious philosophies have surmised that our supposedly hollow planet is the purported domicile for numerous races, fallen angles, dammed souls, droll aliens and even spiritually enlightened super-beings.

Early Christian theology of course affirmed that the head quarters of its arch nemesis is located deep beneath our feet in a damnable netherworld. But Old Nick and his painstakingly harvested souls don’t have this warm and cosy little domain all to themselves.

Indeed, Christianity was not the first ideology to locate its torturous purgatory deep underground. Greek, Nordic and Jewish creeds had already bagged the underworld as the preferred site for their very own Hades, Svartalfheim and Sheol.

Furthermore, following the somewhat misfortunate day and night that saw the sinking of Atlantis, the descendants of this soggy Utopian society also allegedly opted to relocate to these popular subterranean climes.

The already bustling underground kingdom is also famously home to the Agarthans. A race of technically and spiritually advanced immortals who occasionally like to pop up to the surface for a day trip in their nice shimmering UFO’s.

It’s quite clearly a lively old place down there. One recent visitor to the inner earth, Richard Shaver, claimed he had a very nice stay with a bunch of giant people called the Elder Race. The Elder race apparently relocated to Earth from another solar system a long time ago, but found it a little too balmy on the surface for their liking. They therefore created a brave new underground world for themselves. Despite their nice new subterrestrial domain, most of the Elders got a bit bored and eventually buggered off to find themselves another planet to occupy. But being a bit of a mischievous lot, before setting off to the next planet, the Elders left behind some evil robot-like descendants called the Deros, with the express purpose of annoying the hell out of the people on the surface.

During the Nazi heyday the Thule Society were ostensibly keen to find the opening to the underworld. Convinced the entrance lay close to one of the Earth’s poles, they dispatched a fleet of submarines post haste to the Baltic island of Rügen to scout out the front door. Many even believed that rather than perishing in a bunker, the Führer himself, accompanied by his super best Third Reich buddies, legged it to the South Pole and scampered down to the underground realm in search of refuge. Indeed, a collaboration between the astute Agarthans and the renegade Jerrys could go a long way into explaining the later generations of efficient and popular well screwed together UFO’s.

If you constrict your thinking to the characterless geology professed by conventional science and its darned fixation with evidence, you’ll no doubt wonder how such a myriad of civilisations could co-exit beneath the earth’s crust. Those familiar cut-away diagrams of our planet that show the inner and outer cores, the mantle, the upper mantle and indeed the crust, seem pretty tightly packed together. No room it would seem for a paltry moustachioed megalomaniacal fugitive and his cronies, let alone a race of fickle galactic colonists and their naughty robotic children.

If however you ignore the geologists and find yourself a gibbering fruitcake (of which there are plenty), they will be more than happy to tell you (and at great length too), that the earth is in fact a hollow shell containing two (or more, depending of which fruitcake you talk to) concentric spheres, separated by a luminous atmosphere and a rather useful bijou sun at the centre.

This hollow earth hypothesis at least provides some attempt at an explanation, albeit an whimsical one, as to how to accommodate all these disparate residents into the cramped interior of our enchanting little blue-green planet. What it doesn’t really do, is explain how this ragtag posse of fishy people, sinners, totalitarians and wayward interstellar squatters seem to get along so well.

Allow me therefore to expand the Hollow Earth hypothesis with an equally whimsical postulation. I posit that peace and security is quite clearly maintained by the United Under Nations. 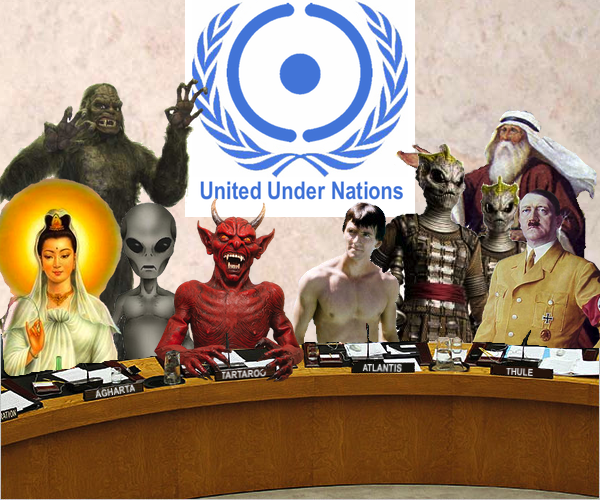