Suggestion for the reform of English Libel Law

I recently listened to this great episode of the Nature Podcast featuring Simon Singh. Nature were presumably keen to talk to Simon following the recent high profile of the BCA court case, however Simon ensured that the wider implications of the consequences of English libel laws were made clear to the listener.

As Simon explains, these libel laws are stifling free speech, by encouraging writers and journalist to not defend valid criticism, or yet still, not write worthwhile articles, for fear of the immense burden the libel laws would place on them should they be evoked or even merely threatened.

Simon suggested that a reform of these laws is required, and hopefully with this huge momentum and support from Sense About Science, something will be done. One possible solution put forward by Simon was a libel small claims court where a valid debate could be engaged in without overwhelming administration costs.

So I had a think about how else we might reform English libel law, and have come up with a very low cost and highly effective proposal. 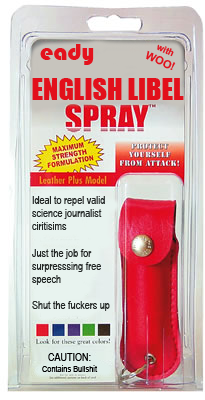 With Justice Eady’s English Libel Spray, aggrieved morons may temporarily silence legitimate opinions with a short squirt of libel in the face of their foe. Eady’s English Libel spray contains genuine woo, that will temporarily reduce the rationality of your critic and enable debate on a level playing field. Alternatively a good dowsing of your rival in Eady’s Libel Spray will disorientate them long enough to take down all your websites and cobble together an unimpressive plethora of “evidence” to impress the credulous with.

BTW, I know my fine upstanding readers will already have signed the keep libel laws out of science campaign, so I wont nag.
Posted by Crispian Jago at Friday, July 03, 2009