What Should We Replace Gideon Bibles With?

I stuck a pointless little poll on this blog last month, for no particular reason other than the fact that I was fiddling with different blog widgets. Anyway, much to my surprise a total of 519 people took the poll, so I thought I’d best let you know how it went.

The poll was inspired by the Gideon’s Bible my daughter was given at school. She was given a lecture by the chap from the Gideon Society and told that this book contained all the answers she would ever need. I’m not actually too impressed that members of a religious group have access to state schools to give away books and attempt to sway the children’s thinking. How would we feel if religious fundamentalists were giving away propaganda at schools and attempting to indoctrinate our kids, or if political parties took over the class-rooms to attempt to recruit the kids to their particular policies? I deliberately chose a secular school so that my children would receive a balanced religious education and not influenced by anyone viewpoint.

Anyway, I suggested perhaps that there are some better books that we could give away to kids, and listed the following four:

The results were as follows: 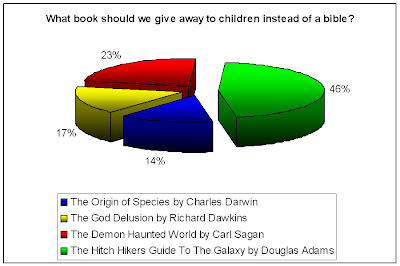 The order you voted in, is incidentally the order I would have chosen myself. The Hitch Hikers Guide was the only one of the 4 books that I read as child, and I suspect I would not have got so much out of the other three if I had not read them as an adult. “Origin of Species” while being easily the most significant and groundbreaking, is, I hate to admit, a rather dry read, and it would not have inspired me as a child. The Hitch Hikers Guide to The Galaxy however covers all sorts of scientific and philosophical ideas that totally engrossed me as a child and I suspect may have impacted me without me realising.

So how do we go about giving a free copy of the Hitch Hikers Guide to the Galaxy to every school child?

Anyway, time for a new poll. I’ve been blogging about allsorts of irrationality lately, all of which seem absurd to me, however, some are more silly that others. So what do you think is the Wackiest Woo? Take the new poll.
Posted by Crispian Jago at Monday, July 20, 2009

As a work of fiction it holds up as one of the greatest pieces of human literature.

If someone were trying to convince you that Hitchhikers guide was a record of actual events, you'd be bashing that instead....

The bible indeed doesn't need replacing. It needs to be removed.
But for the sake of this post, I would have chosen The Guide followed by Sagan :-)

The answer is clearly Sagan.

Few people except convinced atheists would open a book by Dawkins (sad but true). Especially one called "The God Delusion".

The Origin is obviously one of the greatest books of all time etc but hardly bedtime reading.

I am one of the few geeks to have not yet read THG so not sure I can comment but I think it's too long and has a reputation for geekiness so again, people might not open it.

TDHW, on the other hand, is forceful without being preachy, and doesn't trigger oh-no-New-Atheism-I'm-not-reading-that reflex.

I see I was not alone in voting for The Hitch Hiker's Guide! As far as distributing books to children goes, Hitch Hiker has a distinct advantage over all the others (and indeed the Bible) in that it might actually be read by some of them. We were all given Gideon Bibles at school and I don't know anybody who actually READ theirs, whereas lots of us read Hitch Hiker even though we had to spend our pocket money on it!! Thinking about philosophical ideas is infinitely easier when it is coupled with a bit of humour!

Hitchhikers were my favourite books when I was a kid, and carried on reading adams into my early twenties.

Origin of the species is surprisingly dull, and contains almost no reference to homo sapiens, just many observations about animals that let you draw your own conclusions.

I had a gideon bible too though. I loved revelations, and story of the madman was pretty cool (my name is legion, we are many etc.. scary stuff)

My favourite reading though has to be the words of self righteous twits harping an about how terrible the bible is, or how wonderful origin of the species is when they've clearly not read either.

I wonder if the BHA or some similar organisation could (or would) organsise it.

try to gain the love of (someone, typically a woman), esp. with a view to marriage
• seek the favor, support, or custom of

Here's a good definition of woo for you
http://www.skepdic.com/woowoo.html