Following the immensely successful God Trumps featured in New Humanist, I was surprised that I couldn’t find a similar offering for alternative medicine quackery. As I was shocked by the amount of celebrities who are prepared to endorse dubious alternative medicines, I thought that perhaps some Celebrity Quack Trumps were called for. Here’s the first batch... 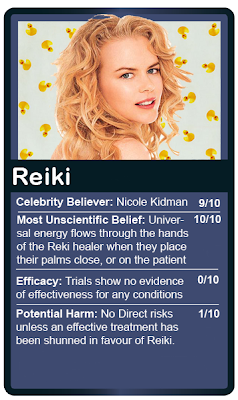 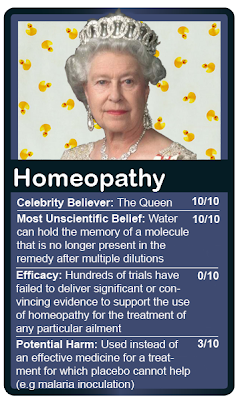 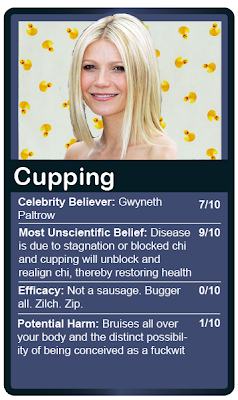 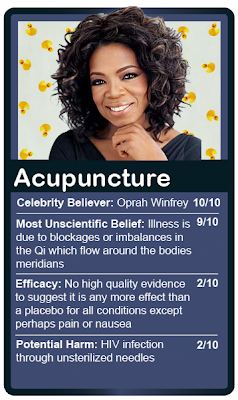 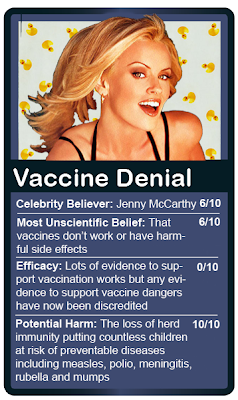 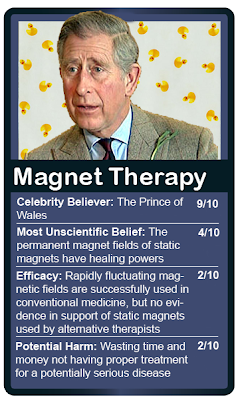 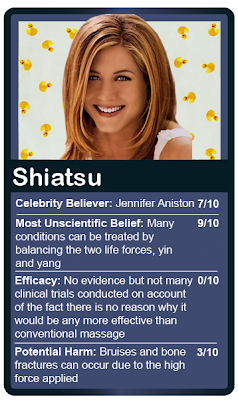 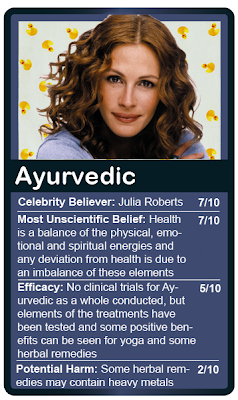 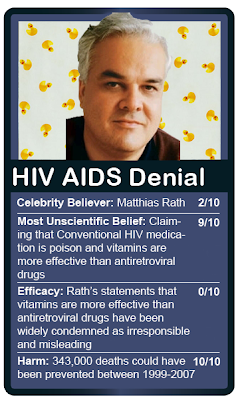 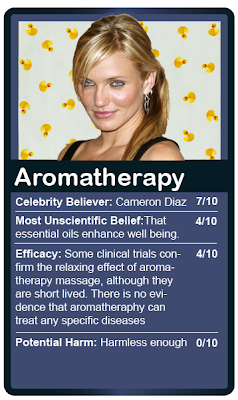 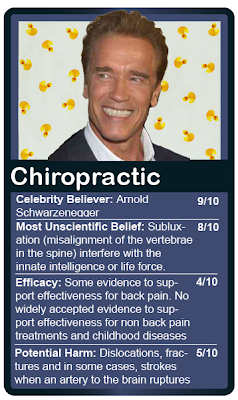 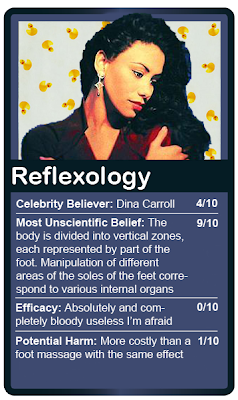 The following resources were used to gather the information on these cards.


Postscript:
After talking to some people at Skeptics in the Pub last night, I realised that quite a few people don’t know how to play “Top Trumps”. I thought it was a global phenomenon, but according to Wikipedia it was more of a British Schoolboy 1970’s thing. Perhaps this is why US links have been referring to them as Collectors Cards, presumably more akin to collecting a set of cards given away with chewing gum. “Top Trumps” were always sold as a complete set to enable you to play the game, and in case you actually want to play top trumps with them, here are the rules.
Posted by Crispian Jago at Friday, July 24, 2009

This is great stuff. Can't wait until the next batch.

Interesting. I wasn't aware of most of the celebrity connections and a few of these wacky treatments.

The aromatherapy one is a bit weak though. Even a short lived relaxing effect could be considered to "enhance well being". Unless Diaz has made stronger claims about aromatherapy treating specific conditions? I don't really follow celebrity news.

Yeah I know Rath isn't realy a celebrity but I wasn't goining to miss him out. More celebrity/quackery suggestions welcome. So far I have received Demi Moore and Klamath Lake algae, leave me any more in the comments field. Especially if you know of a celebrity candler.

My eyes!
What an iconostasis! :)

Mathias Rath is a celebrity, indeed! :) The Star of all Africa and its vicinage! ;) And was very popular for some time past! Though sometimes - was famously beaten by Africans, which turned out to be more educated and clever than he imagined :P

The Queen in to Homeopathy? Perhaps in theory, but if she falls ill, she gets the best doctors in England to look at her. She would never be _permitted_ to substitute woo-woo for any necessary medical procedure!

There are many trials /for/ homeopathic remedies, also a few stories on memory or allotropism in watter.

John Benneth (see the_proving on eGroups/Yahoo! Groups) had already arranged a test for Randi, but was turned down for time, complexity, or some other bullshit.

Great idea, but why is Cupping only a 9/10? Sounds ridiculous enough for a full 100 to me.

And Autymn, unless you produce the links to your claims that there are trials proving some efficacy to homeopathy, that's no different than those people who swear they've witnessed amputated limbs grow back with prayer.

I must take exception to the claim that acupuncture "may" be effective for pain and nausea. Most of these studies still show acupuncture performing no better than the placebo acupuncture treatments given, and in the case of subjective, self-reported complaints like pain and nausea obviously the placebo effect is going to be much more of an issue than any objective measure. I'd also like to point out that those studies showing an effect of acupuncture on pain frequently utilize "electroacupuncture" and then conflate this with regular acupuncture. In reality, though, the needles and the placement of the needles have no effect, and what little effect there is results from the electrical stimulation. This is obvious because transcutaneous electrical nerve stimulation (TENS) units are quite common treatments for low-back pain. So really the "acupuncture" bit has nothing to do with it, and they are just arbitrarily combining it with effective mainstream treatments to try to give it credibility. It would be like tipping the needles with morphine and claiming they could help pain, or attaching wheelchairs to the needles and claiming acupuncture can improve mobility.

Sorry for the rant, but of all CAM treatments, acupuncture is one of the few that gets a lot of positive feedback, even from critical and scientific sources, and it really doesn't deserve it.

Ah, there you go. I knew I'd get an explanation of the context for "Trumps" if I just dug back far enough. To be fair, the digging was not all that unpleasant. Now that I've been exposed to the chewy goodness that is your blog, I expect to stay current.

Your remark re/ Klamath Lake algae took me back to the very first time, pre-Web even, that I researched a miraculous health claim. As I recall it, the results made me sit up and say "Holy fuck![1]

Although the algae itself is not a person, and thus not eligible to get a card,[2] the founder of CellTech (whose name I've misplaced) has a colorful history, including time in the pokey for tax evasion. Maybe a little digging there will turn up some possibilities.

Anyway, your blog is purely amazing. Plaudits and roses for all that you do.

[2] In this case, I'd ask that you make an exception, just so we can see Neil Davies' illustration.

Prince Charles associated with Magnet Therapy - hmmmm... there's something especially poignant about that.
Anyway, as a reflexologist, I'd like to thank you for properly describing it! So many folks have ABSOLUTELY NO IDEA what it is!
I have plenty of clients who don't believe in it, but they do feel better after a session :-).
Just sayin'...