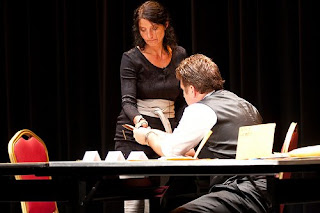 Anyone who reads this blog should be familiar with James Randi’s $1 Million challenge. However, on the off chance that you’re new to this sort of thing…..

The Amazing Randi has a fund of $1 Million dollars that he is fully prepared to give away to anyone who can demonstrate paranormal or psychic abilities under agreed scientifically controlled conditions. Obviously no one has every succeeded or you’d have heard about it by now.

Anyway, on Sunday 12th July 2009 a preliminary test for the $1 Million challenge was held in front of a live audience in the Conference Room at the South Point Hotel Casino and Spa in Las Vegas Nevada as part of “The Amazing Meeting 7”.

The challenger, Connie Sonne, claims to have the ability to be able to find certain playing cards by dowsing for them. The test conditions that she signed up to consisted of dowsing for randomly selected playing cards between 1 (an Ace) and 10, three times for three different suits. The picture cards were discarded and the deck sorted into the 4 suits, the cards within each suit were shuffled and each card was placed separately inside 2 sealed envelopes and then all the envelopes containing the 10 cards of each suit where placed inside a larger envelope for that suit. Three suits were selected randomly, then a specific card within each suit was chosen using a ten sided die. For each of three selected suits the 10 envelopes containing each card were placed in-front of Connie in a semi circle. Connie then doused for the required cards. It was agreed that Connie would need to correctly locate all 3 cards to successfully pass the challenge.

Although I was not fortunate enough to be there, I was able to watch the challenge on a live video stream. As a grumpy, seasoned old skeptic, you may well have expected me to be eagerly hoping for Connie to fail the challenge so I could once again confirm my beliefs in the non existence of such silly stuff. However, much to my surprise, as my wife and I both watched events unfold; I was mentally cheering Connie on, actually hoping that she would succeed.

Connie looked confident and had a pleasant demeanour but unfortunately failed to correctly locate any of the 3 cards and so failed the Challenge. As with many challengers, I got the impression that she genuinely believed in her claimed abilities rather than being a simple fraudster.

A week or so after the challenge, I was delighted to hear Swoopy speaking on the Skepticality podcast saying that she too was hoping for Connie to succeed, which caused me to reflect on things.

I may indeed be a grumpy old skeptic, but as a supporter of the scientific method, I’m perfectly willing to accept that I might be wrong and that I may have to reconsider my beliefs in the light of any new valid and contrary evidence.


So what would happen if Connie, or someone else, did succeed in the preliminary challenge?

Well for a start we would have to take their claim seriously. More rigorous tests and experiments would be required. If success turned out to be unrepeatable and down to fraud or pure chance then that’s just more evidence against an irrational belief. But if the claims of the challengers turned out to be true, that would be completely amazing and I would be quite tizzy with excitement.

Science would be forced to investigate the phenomenon in more detail so the effect can be fully explained and understood. As a result scientific understanding would eventually leap forward and embrace this new knowledge with all of the benefits and advantages that scientific advancement brings. Of course this is pretty unlikely, and much money and resources have been wasted by governments and organisation chasing wild geese before. However, the beauty of the million dollar challenge, is that the critical thinking skills of those at the JREF make it less likely that we are duped into wasting valuable time and resources chasing rainbows. But if someone did get through, that would most definitely not be #JREF fail, it would be very existing stuff indeed.

So either way, the million dollar challenge can't lose, it either continues to support and provide further evidence for the current scientific consensus against the existence of paranormal phenomenon, or it opens the door to a whole new sphere of valid and worthwhile scientific research, and that’s worth 1 million of anyone’s dollars.
Posted by Crispian Jago at Wednesday, July 22, 2009

I correctly predicted that Connie would only take a little while to begin blaming her failure on others, and obliterate any good-will that she may have garnered.

Her reaction in the JREF forums has been referred to as clearly libellous, claiming that the presenter used prestidigation in order to cheat her.

All very predictable, really.
Honest woo-meisters appear to exhibit a childish sort of sociopathy, where any success is down to their special gift, but all failures are the fault of an external influence.

Make that "prestidigitation".
Oh, my Kingdom for an Edit Feature!