Physics text books across the globe will have to be re-written after an undercover photographer recently scooped this earth shattering snap at a famous Las Vegas Casino. 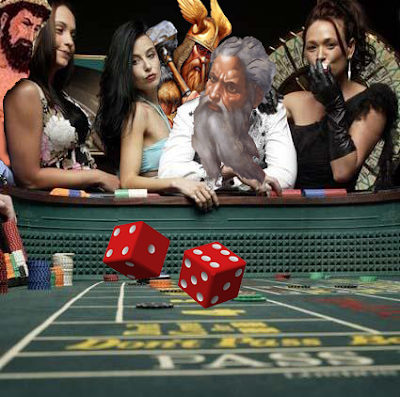 A number of major deities including Yahweh, Thor and Zeus were thought to be attending this years Amazing Meeting (TAM 7) at Las Vegas with the express purpose of disproving the existence of the mythical James Randi. Event Organiser, and notorious Richard Wiseman impersonator Phil Plait refused to comment on the incident, but it is hoped that he will put a link up on his blog.

Much to amazement of many scientists, the photograph of Gods playing dice clearly disproves Einstein’s famous prediction on the gambling preferences of deities. This of course means that all of his other theories are now in doubt. This is likely to cause severe problems for the Satellite Navigation industry who up till now have relied on Einstein’s reworking of Newton’s gravitational laws in his general theory of relativity. Uncle Albert’s General Theory of Relativity has made it possible to pinpoint exact geographical coordinates from orbiting satellites by taking into account the curvature of space-time. If Einstein is now proved wrong, as suspected by many media halfwits, millions of drivers may discover that they are not actually where they thought they were after all. Interviewed shortly after the photograph went global, physics professor Brian Cox admitted that “Things might not necessarily get better after all”.

Christians of all denominations, especially Methodists, are once again refuting the evidence right before their eyes and claiming that the photograph is in fact photo-shopped by a lone IT consultant who should really know better, working from his study in Basingstoke. A spokesperson for the local Methodists Chapel in Basingstoke, the right reverend Ben Goldacre, told a pub full of sycophants that “It’s probably a bit more complicated than that”.
Posted by Crispian Jago at Tuesday, July 07, 2009

Minerva help us!
...who up till know have relied on...
Your Fraudian slip is showing, Sir Crispian!

______________
P.S.: The oft mis-quoted and supposed Einstein quote is, in fact, an inaccurate translation from the original German, with its loose plurals etc.
It more lucidly translates as:
"Gotts play Crap mitt ze Universe, Neils"

Michael,
I have rearranged my Sigmundian Petticoat to shield my embarrassment. Thanks for highlighting my fuckwittage. I love the fact the not only do I not have to spell the quote out to my esteemed readers in my inane droolings, but they supply additional more interesting information. Bravo Sir.