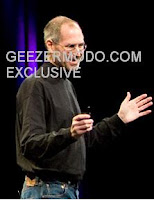 The new improved version of Steve Jobs, Apple’s CEO, was lost on March 18th at a German themed pub in Redwood City, California. The new Steve was inadvertently left behind in the pub by one of Apple 27-year-old cybernetics engineers. “Steve was so engrossed in working out how to lock-down the beer glass he was drinking from in order to control the liquids that could be placed in it, that he failed to notice everyone else had left”, he later posted on his Facebook status when realising his mistake.

The new version of Steve Jobs was later discovered by an unscrupulous customer who sold the prototype CEO to Geezermodo for an alleged $5,000. Geezermodo then went on to publish exclusive pictures of the new Steve Jobs on their web site.

The new Steve Jobs retains many of the familiar features of the old model and is still instantly recognizable as Steve Jobs. However the new model is more chiselled, as the engineers have opted to lose some of the rounder edges. The top part of Steve retains the familiar black sweater used in the previous models but with more defined edges. Many pundits had anticipated a more formal bottom half, but the new version appears to still be in jeans for reasons of comfort.

Skeptics however claim that the accidental leak of the new Steve is all too convenient, and suspect Apple to be masterminding their own PR stunt in an attempt to hype up the much anticipated release of Apple’s updated CEO in the summer.
Posted by Crispian Jago at Tuesday, April 20, 2010

He sure can multi-task, can't he?