Why Prince Charles should STFU 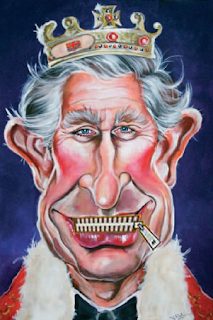 Following the Prince of Wales’ recent bout of gob shite, I posted some thoughts that triggered a few interesting comments.

There are a lot of parallels that can be drawn between monarchy and religion, both are clearly happy to rule in the absence of democracy and both, despite being rather archaic principles, are still adored by a substantial number of loyal followers.

In recent UK history we have enjoyed both a fairly benign monarchy in Queen Elizabeth II and a relatively benign religion in the Church of England.

When the Church is quietly presiding over our weddings and carol services, most of us enjoy the sense of occasion, tradition and ceremony it provides. However, when it starts imposing its more irrational beliefs and pious perceived superior morality on modern society, many of us become less tolerant.

The rise of scepticism and the recent popularity of the new atheism is undoubtedly in part a reaction to the more fundamentalist end of the religious spectrum. When the religious are telling their children nice old stories about arks and floods on a Sunday morning, no one really gets too excited, but when they start trying to impose anti scientific creationism in main stream education or seemingly ordinary zoo’s, critical thinking people start getting pissed off.

While the Church of England generally remains a nice cosy bastion of traditional English summer fetes, home made jam, Victoria sponge cakes and cucumber sandwiches, we don’t need to look too far to see the consequences of taking their teachings more literally.
Posted by Crispian Jago at Sunday, February 21, 2010

There is another spectrum of belief - going from those who don't care about others' beliefs to those who wont stay quiet until we all believe the same thing as them.

Religious fanatics and modern skeptics are at the same end of that spectrum, and I'm happy for them to stay there beating each other up.

Sadly it's not just fetes and jumble sales. Church schools are on the increase. The C of E is not alone in wanting more of them but, as the established religion, they have the loudest voice. Whatever they may say about not proselytising, not being socially divisive, not cherry-picking the best pupils and providing parents with choice, they are clearly desperate to recruit the next generation of church-goers as attendance plummets. As Rowan Williams said 'A church school is a church'.

And now that religious schools are allowed to taint PSHE with their religious values, they are even more of a menace.

Freedom of speech is one thing, demanding tax-payer funded privilege is quite another.

JC, you're wrong, for the simple reason that skepticism is not a system of belief but a system of inquiry. (Why do so many believers have trouble grasping this point?)
Speaking as a skeptic, I don't give a toss what you believe in so long as those beliefs don't affect me or those around me. To have public policy decided by reference to evidence rather than dogma or unsubstantiated belief is all I ask.

Gammidgy, you're wrong, for the simple reason that a system of inquiry ultimately depends on your belief in it. (Why do so may skeptics have trouble grasping this point?)

JC. Perhaps. But I would contend that this system of inquiry is the very same natural process that we all used as infants to understand the world around us and that we all continue to use every day. Put simply, it is allowing experience and observation to dictate our theory of the world and to change our view with new evidence.
Yes, skeptics "believe" in this system - we have "faith" in it - because it is common sense and because it works. Upon it is built the entire edifice of technology and scientific understanding. Anyone who claims this system is not worth believing in truly has some delusion.
Where we differ is the extent to which we allow other beliefs to override common sense.

JC / Gammidgy...
Tim Minchin puts it very well in 'Storm'.
A skeptical method of inquiry is not based on faith; it simply requires current best evidence.
Give me the evidence & I'll change my mind & agree with you.
I probably wouldn't go as far as Tim suggests, though.

You're missing the point, and don't even know how your own mind works if you think you can take faith/belief out of the equation. It has to operate somewhere, otherwise you're back to where descartes got stuck with "I think therefore I am."

At some point you have to have to just have faith in whatever reason, logic, system of analysis you've just used.

The difference @JC is that s the skeptical method allows modification of behaviour based on outcome. The faith based approach enforces dogma over outcome and modifies only under protest, if at all

@JC...
If you want to redefine the word 'evidence', that's fine, but I'd rather not get into Derrida-da Postmodernist deconstruction of what it 'means' to have 'faith' in a system of enquiry.

You're right, of course, that in the end, there's an infinite regress to justify justification, but that leads to disappearing up ones own nether-regions & not achieving very much. (Descartes got stuck there because he inferred a 'sum' from a 'cogito' & took that as axiomatic)

So I concede the one point - I can't 'know' in an A.J. Ayer sense that the skeptical method is absolutely correct.
But I think I'll stick with it until there's any evidence that a better method has come along (uh-oh - circular argument there!)

You look at your bread-bin and see there's no bread, you walk down the shops, using your eyes to avoid getting run over, treading in dog doo, etc, you go into the shop, having ascertained, using your eyes, that it's a shop, pick up some bread, pay the correct amount using your brain to work out how many coins you need to match the price on the shelf... etc.

If that's a system of enquiry then so be it, but science is just the extension of that to more interesting things.