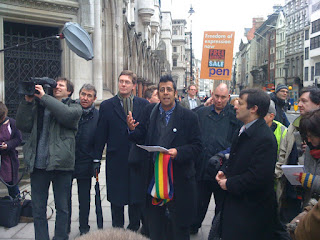 Before you read my cobbled together thoughts on the Singh BCA Appeal at the High Courts today, you really ought to read a more sensible account than my childish paraphrasing. I recommend Jack of Kent's Good Day in Court or Padraig Reidy’s piece for Index of Censorship.

So from my law illiterate viewpoint, things looked a little like this:

The courtroom itself was jam-packed as Jack of Kent busied himself setting out extra folding chairs for the Simon Singh Massive. As the crowd hushed and the clerk of the court asked us to rise, I was a little disappointed that they didn't blow some dry ice and play the Rocky theme tune as the three judges (Lord Chief Justice Lord Judge, Master of the Rolls Lord Neuberger and Lord Justice Sedley), appeared from the wings to take their seats.

I’m not sure who won the toss, but Adrienne Page QC opened the batting for Team Singh. The judges seemed a little perplexed with her decision to open with her fallback position of defending the case from a point of fact rather than fair comment, even though she later gave very credible arguments as to why indeed the article was comment and not fact.

Page QC also seemed to do a pretty neat job of defining “happily” as in “happily promotes bogus treatment” to mean something along the lines of “without worry” as opposed to “knowingly”, and the Judges seemed pretty accepting of that definition

Things seemed to go pretty well, Simon’s QC seemed to raise all of the pertinent points and the three old boys at the front whilst probing did not seem especially unfavourable to her case. It became much easier to judge the state of the wicket when the opposition came in to bat after lunch.

Lord Chief Justice started off the afternoon by stating the he was buggered if he knew why the BCA didn’t just accept the Guardian’s right to reply instead of arsing around with a dumbass libel case that will end up costing some poor bastard a shitload of cash. At which point I would have given my football rattle a good spin, had I been allowed to bring it.

Lord Justice Sedley then went on to ask the BCA’s QC if she would find the following statement libellous:

“The British Chiropractic Association claims that their members can help treat children with colic, sleeping and feeding problems, frequent ear infections, asthma and prolonged crying, even though there is not a jot of evidence. This organisation is the respectable face of the chiropractic profession and yet it happily promotes these treatments.”

Of course Lord Justice Sedley had omitted the word “bogus” and was fishing to see if the BCA’s QC would still claim the statement libellous without the word, thus pin pointing the exact word of the libel.

Spotting the trap the BCA’s QC responded with: “Er, um. Er, ah, mmm, uh”, before cleverly plucking: “I think it would be more important to focus on the actual words used by Dr Singh” from her arse.

This would have been a fair rebuttal if later on in her case she didn’t consistently try and bolster her interpretation of the meaning of Dr Singh’s original text by using example “what if” substitutions. For example, what if Dr Singh had said, “Knowingly promotes bogus treatments” instead of “Happily promotes bogus treatments”. Or why did Dr Singh not say “not a jot of reliable evidence” instead of “not a jot of evidence”.

The BCA’s QC also had a good go at trying to prove that the comment was “fact” rather than “comment”, by taking the opening sentences one at a time and claiming each one was a statement of fact rather than a comment. However, it seemed to me like the Judges were having none of it.

The BCA’s QC then had a go at claiming that he term “bogus” meant “deliberately dishonest”. This time Lord Chief Justice challenged this definition by stating that Dr Singh himself qualifies his use of the word “bogus” in his following paragraph:

“I can confidently label these treatments as bogus because I have co-authored a book about alternative medicine with the world's first professor of complementary medicine, Edzard Ernst. He learned chiropractic techniques himself and used them as a doctor. This is when he began to see the need for some critical evaluation. Among other projects, he examined the evidence from 70 trials exploring the benefits of chiropractic therapy in conditions unrelated to the back. He found no evidence to suggest that chiropractors could treat any such conditions." 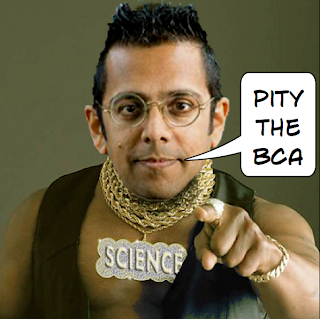 Lord Chief Justice put it to the BCA’s QC that this paragraph clearly defines bogus as meaning ineffective as a result examining the evidence with Professor Ernst rather than being deliberately dishonest.

Lord Justice Sedley kept the mood quite jovial by injecting a few comedy one-liners and he even accidently said “homeopathy” at one point instead of “chiropractic”. Oh how we laughed.

Anyway, as a court virgin I don’t pretend to be able to read the thoughts and intentions of the three senior appeal Judges, but from a supporter of science, reason and critical thinking, it certainly sounded pretty positive to me.

Lord Chief Justice finished off by saying that they would all go away and have a little think about it and then write up a nice report (I believe in 6-8 weeks).
Posted by Crispian Jago at Monday, February 22, 2010

Nice write up - I loved your tweets today :)

Thanks for this account - I missed the afternoon session. I was very pleased at how effectively the word "happily" was suggested should be interpreted as "blithely" or "insouciantly" rather than "knowingly or deceitfully". If the judges accept that then it does not matter whether they find that "bogus" was reasonable as it was defined by SS in his next paragraph and/or that "not a jot of evidence" is a reasonable way of asserting that "scientific enquiry concludes no evidence of therapeutic effect" or "no good/reliable evidence of benefit".
As I understand it, regardless of how they interpret the meaning "happily", etc as long as they view bogus/not a jot, as a factual statement then the rest qualifies as honest comment. In other words they will rule that SS has a Fair Comment defence available which Eadie J rejected.
One judge even asked if SS could have run a Reynolds defence on the bogus/not a jot point I presume because it could be argued that it was based on investigation and was responsibly made as it was the conclusions of academic and scientific enquiry.
Does that make sense or should I give up the law and go into politics?

Great lay-person's court report Chrispian. It was my first time in court too and as well as finding the whole thing fascinating, what struck me most was that we all listened intently and often on the edges of our seats for hours on end to just a few people talking. And in that time we weren't shown a diagram, a map or any photos; there were no PowerPoint presentations with clever animations, the session wasn't broken up with a short practical-exercise to maintain our attention levels, and there were no regular breaks for tea & coffee. And still we listened and concentrated. I might have to rethink my ideas about (adult) education...

Does anyone else think that Jedward show their support by having a Simon Singh haircut?

Oh it sounds such fun. I wish I'd been there though given my ability to keep quiet it's probably a good thing I wasn't! Thanks for a great write-up!

“Does that make sense or should I give up the law and go into politics?”

Well don’t go into politics! On Monday you were an MP for the only major party that is actually committed to libel reform in a pub full of sceptics in an election year.

Did you slag off the other parties? Did you brag about Dawkins at the conference? Did you claim that the only way to stop the UK sliding into the Dark Ages was to nip round to the polling station and put a cross next to the Lib Dem’s name?

No you didn’t, you talked like you wanted to achieve reform of the libel law rather than it being a useful tool to get what you wanted.

It was almost as bad as Jack of Kent’s “journalism”. He had the perfect opportunity to spin a hate piece on Cheri Blair and what does he do? Write a fair article that explained facts.

You guys have no idea.