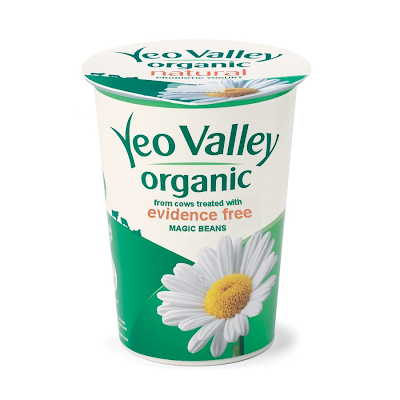 Here's a link to the Yeo Valley blog where they tell us all about additional treatments for their cows.

It appears that Steve, the herd manager, has been treating the cows with homeopathic treatments to ward off flies and ease stress. The blog even claims that:

"the use of homeopathic treatments not only helps to develop a more robust immune system, it also means no withdrawal periods for milk and meat while the animal is being treated, as would be the case when antibiotics are used."

Anyway, I thought up three possible reasons why Steve likes to use homeopathy:


Perhaps you can think of some more, or you could try an leave a comment on their blog, but I suspect they just publish the nice comments from the deluded people who support their pseudoscientific nonsense.

or you could say hello nicely on Twitter: @yeovalley

Since posting this a number of people have contacted me to say they have left comments on the Yeo Valley blog, although I see none of them, including my perfectly friendly question, have passed moderation and been published. It seems Yeo Valley are only really interested in your comments if you happen to agree with their irrational alternative medicine policy.

I also received a copy of an email trail between a FB friend and Yeo Valley, which conisisted of a polite enquiry about their homeopathic policy, followed by a standard fob-off answer that did not address the question. My friend then followed the response up with a second email pressing them for information as to why they thought homeopathy worked, however it looks like the "Too hard" light must have come on in the marketing department, so they chose to simply ignore the follow up letter.

Oh, well, I suppose I'll have to boycott Yeo Valley, which is a real pisser because their mango and vanilla yoghurt is actually really nice. Bloody principles.

Email ThisBlogThis!Share to TwitterShare to FacebookShare to Pinterest
Labels: Homeopathy

If he is suggesting they used antibiotics to reduce stress and ward-off flies then I would speculate that this is one trial where the efficacy of homeopathy could for once match that of the drug treatment.

To be fair, though, it is a tasty yogurt.

I recommend it with honey.

Organic honey from bees given regular Reiki and acupuncture naturally.

A somewhat skeptical enquiry has been posted to their 'blog', but is apparently "Awaiting Moderation".

We shall see as to whether it is given the appropriate homeopathetic response, vis: diluted until there is no rationality remaining.

I left a sceptical comment this morning, 12 hours later still awaiting moderation. However, the longer they leave my comment unmoderated, the stronger its powers will become.

Well I was a little more direct and rightly guess we wont see my post. It ran like this:
"Are you kidding me, homeopathy!
You're selling to a dwindling crowd of idiots if you really believe this.
Sack your Ad man, tell the truth and keep magnet blanket freaks away from your tasty products".

I have just spoke to Compassion In World Farming about this soil association certified company. I want to know why an organisation that wants farm animals treated humanely endorses the soil association who allow magic water treatments? This is not care it is neglect and anyone using magic water,beans, or sugar cubes should be prosecuted under animal welfare laws.

Please Complain to: Compassion In World Farming and The Soil Association

I left a comment on their blog in January. It still says it's "awaiting moderation".

Wonder if it would have taken so long if it had said something like "Wow! Homeopathy for treating cows! That's like, man, really cool and natural!"

(It said something a bit different).

However, anyone who wants to let Yeo Valley and the world generally know what they think about this might want to visit Yeo Valley's Facebook page, where they seem to have a more relaxed moderation policy. I left a comment there myself, and it didn't get deleted, although it's a bit old now so you have to scroll down a little way to see it.

I wonder if Steve will be getting a call from DEFRA or the Veterinary Medicines Directorate?
http://ww2.defra.gov.uk/news/2010/12/17/pet-remedies/