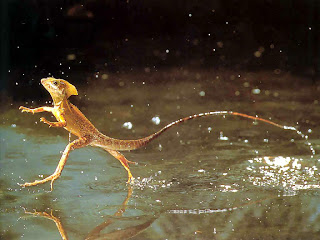 At 2,000 frames per second, this new footage has helped scientists unlock the secrets behind the lizard’s miraculous feats.

Unlike water boatman or small insects, the basilisk lizard is too large and heavy to simply balance on the water tension and has therefore puzzled scientists for many years on how they appear to simply run across the water with a total disregard for the rules of physics as currently understood.

Many theories have been mooted as to how the lizard so effortlessly accomplishes this graceful act including calculating the optimum speed and direction of force ratio to the generation of small water bubbles to increase the time available for each step.

However, scientists at the Discovery institute claim that analysis of the lizards DNA and careful studying of the video footage has finally revealed that the lizard can walk on water simply because it is the son of God.

Further studies have revealed that the lizard can also turn water into wine and make some bread and fish go a very long way. Despite the miraculous abilities of the Jesus lizard, scientists have warned the faithful not to tempt the lizards into performing more useful feats. When quizzed further on why the lizards are able to suspend the natural laws of the universe in order to achieve fancy tricks but not to alleviate pain, suffering, famine and hatred, scientists simply responded: “Lizards move in mysterious ways”.

Finally... a new and exciting chapter for the conclusion of "Pandas and People".

I take it that these are not related to the "twelve-foot lizards" that David Icke goes on about.

The Jesus Lizard are also a band. They're quite good. Kurt Cobain was a big fan apparently.