On the 16th September 2009 I attended a debate at the Royal Institute in London with Dr Ben Goldacre and the current science minister, Lord Paul Drayson.

Drayson argued that since the MMR and BSE science reporting debacles, the UK has improved its reporting of science issues to the general public and we should therefore praise our high quality science writers and reporters. Goldacre took the stance that the media still often makes a shoddy job of reporting many pieces of science news and suggested that the media frequently prefer attention grabbing headlines to accurate scientific content.

Both Drayson & Goldacre presented good examples to back up their viewpoints. However after looking at several of Goldacre's examples of bad science in the media, I couldn’t help but notice a pattern. As an IT consultant I can generally spot recursive trends and algorithms and so my suspicion was raised. As many of these articles seemed to emanate from the Daily Mail, I secretly hacked into the Daily Mail’s computer system, and after a little searching around I located what I suspected to be the source of the problem.

I can now exclusively reveal that the Daily Mail is using a sophisticated software application to automatically generate its science articles. Journalists simply complete a form and tweak a few options and values before automatically generating the required story. Click the following screenshot to enlarge... 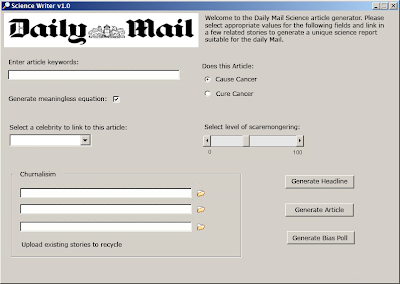 Now, if only that were a real app, we could host it on a website...

Genius. Maybe we could make that into an iPhone app.

Does this make their office a "healthscare facility"?