On September 15th the Natural History Museum in Kensington will open the doors to its New Darwin Centre. The facility will give unprecedented access to the museums huge collection of stuff. Exhibits will include tat brought back from the Galapagos Islands' gift shops by Darwin himself on his epic journey on the Beagle. The opening of the new facility coincides with the 200th anniversary of Charles Darwin’s birth and the 150th anniversary of his ground breaking work: “On the Origin of Species”.

Richard Dawkins, the media proclaimed “King of the Atheists”, has also decided to cash in on this auspicious anniversary by releasing a new book providing undisputable evidence for Darwin’s theory. It is expected however that dim-witted creationists will nonetheless dispute Dawkins’ undisputable evidence. With this in mind, the rosy cheeked prof has pre-empted the issue. For those unreceptive of the logic and reason contained within the book, Dawkins has ensured that the tome is sufficiently large, blunt and weighty in order for it to be used to bludgeon some sense into the heads of the credulous.

The Darwin Centre has adopted Dawkins’ cunning ploy to create a new interactive feature to encourage children to participate in the creation/evolution debate. By using Dawkins’ new book to continually twat a never-ending procession of crazed creationists; children will learn a valuable lesson in the futility of arguing with the deluded. The senior curator for the new facility is delighted with the new exhibit and stated: “It’s like well cool, you smack them fings and they keep coming back innit.” 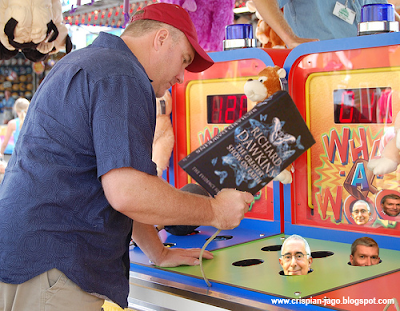 Camp Quest UK director Samantha Stein will be bussing in a multitude of children to try out the new attraction. At a recent press release, Samantha told our reporter: “I appreciate the futility of arguing with creationists, but I’m keen to give the children their own opportunity to twat the shit out of these nut jobs”.

Da greatest show on earth, bro.
Ah gotz mine
An ah smak da spine
on the bonce of Stein
get in line
if yas got the time
to hear dem whine
wid their lying slime
coz lyinz a crime
an' it's war-time,
innit?