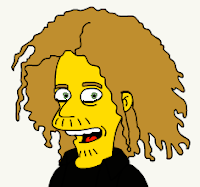 I posted my Simpsons Top Trumps – Skeptics Edition, last week just before buggering off on holiday. Since then they have received over 50,000 page views (According to Google Analytics), so I have been rather frustrated that I have not been able to correct a few problems with them until today.

The following updates have now been made:

I have also just about decided on the next 26 skeptics that will make up the full deck of 52 cards. But I’m not telling you who they are yet. Check back in about a week to see if I’ve managed to get around to doing it.

Let me know if you have any more comments or suggestions for the next batch.

Also, does anyone know of the legal implications of printing and selling the cards at TAM London (proceeds to JREF)? If only I knew a sceptical lawyer.

Put me down for a pack if you can legally sell them.

couldn't you "give" them to people who make a JREF donation?