This blog was prompted by a text message from Jack of Kent daring me to write it.

So, here’s another batch of top trumps, this time inspired by the Simpsons, but skeptically themed. You probably can’t read the text on the card so click each one to expand them. 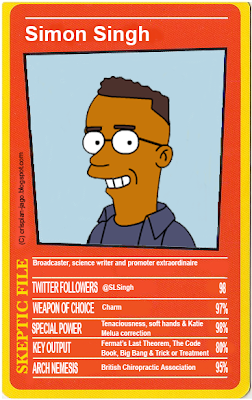 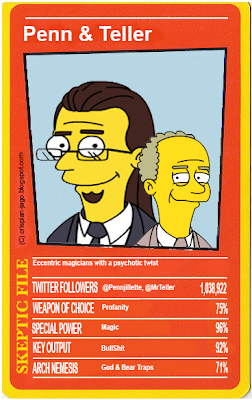 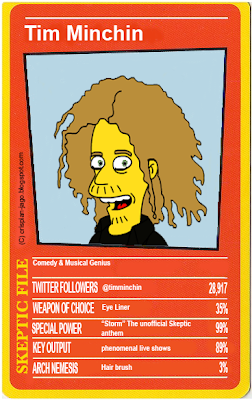 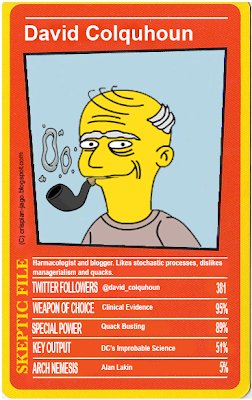 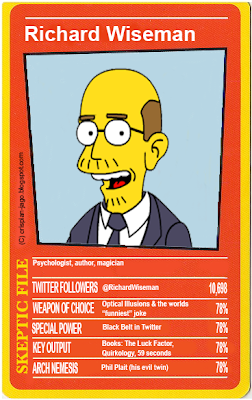 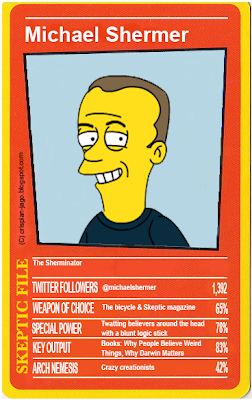 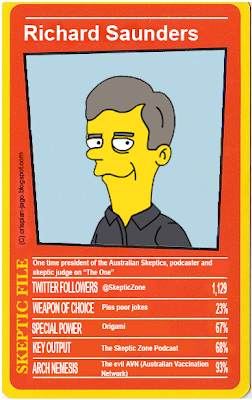 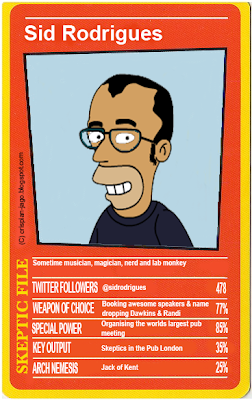 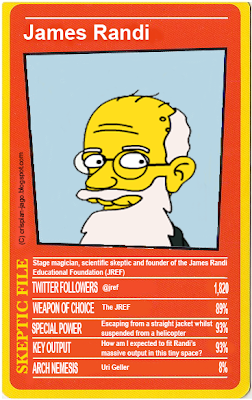 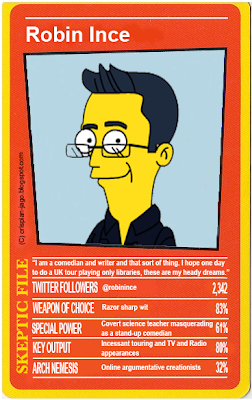 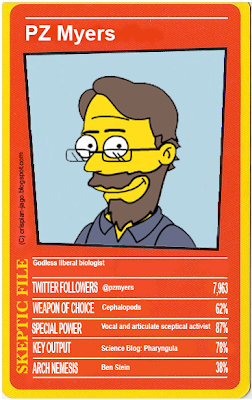 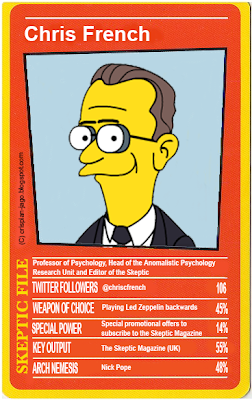 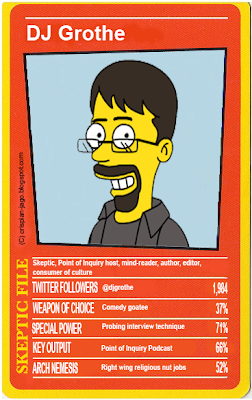 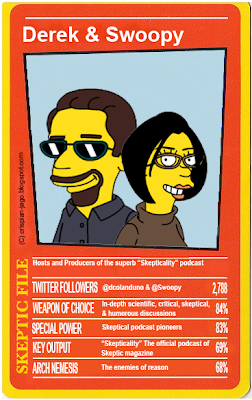 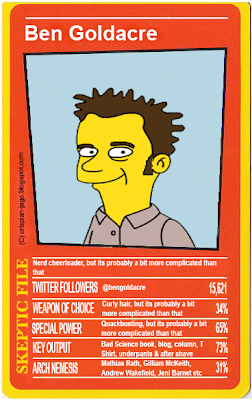 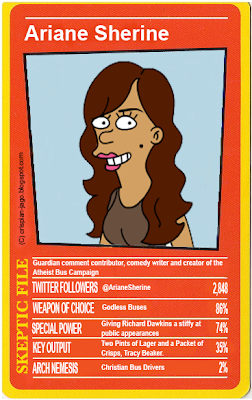 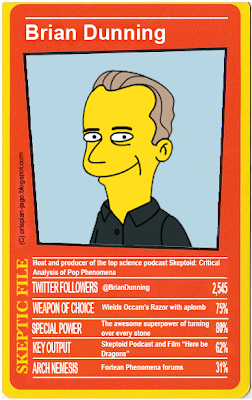 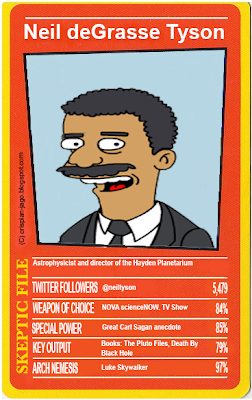 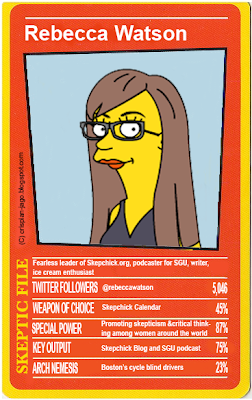 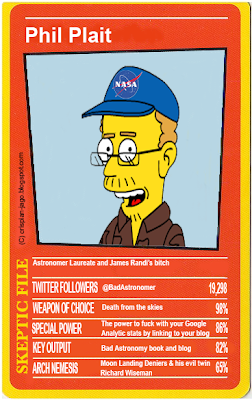 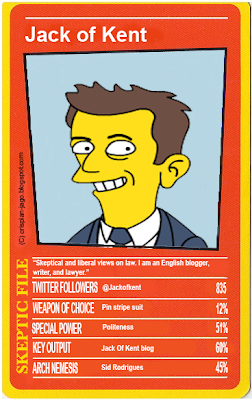 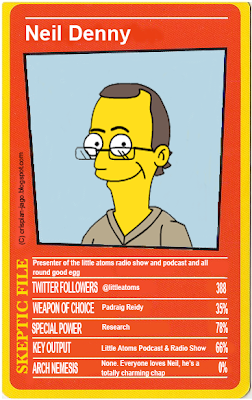 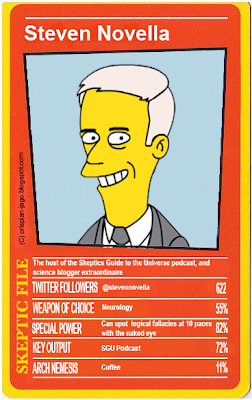 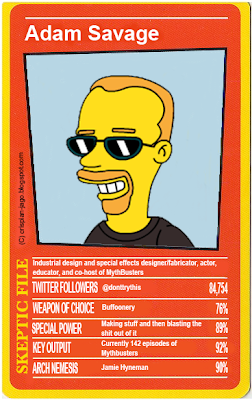 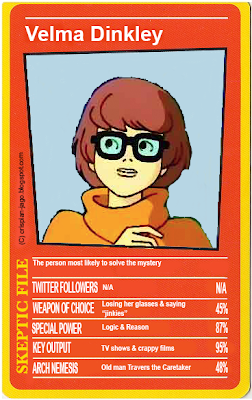 My original list had over 100 great names sceptics, which I whittled down to 52. However, to make the task a tad more manageable I have restricted myself to 26 cards. So apologies for those I’ve missed out, but if it proved popular, there will be no problem in knocking up another batch. Also, I suppose this goes without saying, so regardless of the content of the individual cards, I have massive respect for all the sceptics featured.

Laugh? I nearly shat meself (but at least I've got bum wad)

Roy, I tried to Simpsonize Velma, but she looked crap, so I went with the regular Velma instead. BTW I did an image google search for Velma to get a good pic (without the google filter on), and I was suprised to see what she gets up to in her spare time.

Richard, C'mon, we both know that your jokes are shite. But I love them and the show anyway, sorry I didn't feature Dr Rachie, Podblack, :) Singer etc, I did intend to do them too. Nice afternoon session at the Oval today. :)

Well done! Now my goal in life to be worthy of a Simpson-skeptic-card of myself someday! Thanks for the inspiration!

I agree with SurlyAmy, it's now my goal in life to get turned into one of these cards. ;p

Wah! Rachie and me were potentials?? Oh, we love you. Love you more that someone FINALLY spoke out about Richard's jokes!! :D :D

So how many sets of these cards will you be selling at TAM London, so that people can try to get some of them autographed?

"Do you know what happened when I got swine flu? They took me to hospital in a hambulane."

"Do you know what happened when they gave me some medicine? It was oinkment."

I was "Simpsonized" by some students of mine a few years back. The likeness is scary (as with the skeptics above). Now, if only it could happen for real and I could get a cameo on the show...

Speaking of that, what skeptics have been on The Simpsons? Only S.J. Gould comes to mind?

This is just made of total Booyah!!! Love it. Hope to see more.

I am disappointed that Velma keeps "loosing" her glasses and she says "jinkys"... Losing and jinkies.

Looking sharp with the new layout!

And the cards were top notch, as usual.

Thanks for pointing out my spelling errors. I always spell something wrong. I can't correct it now as I don't have photoshop on this narrow boat, but it will be corrected next week

I wish I had the time to actually print these up and put them out at the Skeptic Track for Dragon*Con in a few days!

What, no George Hrab?

These are hilarious! And serve as a great primer on people to look up if you haven't already.

I think Michio Kaku (@mkaku2050) would have made a great card.

Love these cards. My only nitpick is that Adam Savage's Special Power should have been "Blowing Stuff Up".

Male - female ratio? I've no complaint about the people included, but a few more women would be nice. Does anyone really think that skeptical males outnumber females by such a large margin?

Penn and Teller have done the show; Stephen Hawking (I assume he counts as a skeptic? ;) ) has done it several times. Can't think of anyone else, but then I've missed the show for the last year or so--I have a lot of catching up to do!

Ricky Gervais has been on the Simpsons

wv: mungiest as without RD this is the mungiest list of skeptics ever

One of my favorite skeptics is Lisa Simpson, but I am pretty sure there have been other real skeptics on, although (other than the already mentioned P&T and SH) none come to mind.


That's just depressing. One of the reasons I rarely pay any attention to the personal lives of entertainers.

You got any links to back up your woo-woo claims on Yeardley Smith.

Just in case Lisa is featuring in part 2

Ha ha! Finally got to a real computer so I can thank Crispian for giving me more hair than I deserve.
;)

Have you thought of producing physical cards?

Just discovered this researching some Top Trumps for deceased UK atheists. Thanks for the inspiration!
http://humanistheritage.ning.com/group/gamesplay?xg_source=activity