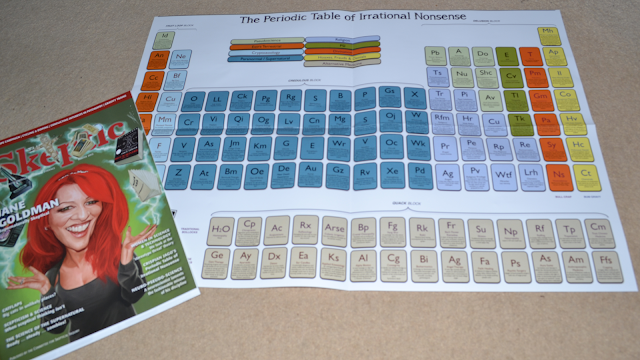 The all new and improved version of my Periodic Table of Irrational Nonsense is now exclusivley available as a 4 page pull-out poster free inside Vol. 24 Issue 1 of the UK Skeptic Magazine.
Subscribe or order an individual issue to get your copy.
The original version is also still available on this blog.
Posted by Crispian Jago at Saturday, December 29, 2012 2 comments: 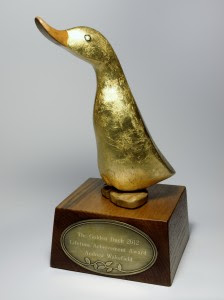 Science, reason, and good thinking is a concept that resonates well with the good folks of Winchester. When Winchester Skeptics in the Pub started inviting science writers, broadcasters and academics to come down and talk about various topics from a perspective of empirical evidence rather than faith and superstition our audience quickly outgrow the largest pub venue we can find. Winchester Skeptics is now based in a 180 seat auditorium at the Winchester Discover Centre and we were very keen to team up with the Good Thinking society to help choose the winner of the inaugural Golden Duck award.

Myself and two of our of our regular members presented a compelling case for each the three shortlisted nominees.

Marina de Joslin detailed Prince Charles's Integrated Health Foundation and its consistent and irresponsible promotion of pseudoscience and quackery along with his incessant and unqualified meddling and underhand government petitioning to attempt to influence anti-scientific policy.

I considered the case for David Tredinnick, the MP for Holland and Barrett who has used his seat in parliament to advocate homeopathy and radionics. Tredninck's parliamentary expense claims for new age astrology software and training courses to enable him to investigate the links between alternative health and astrology make claims for decadent duck dwellings and moat sanitation services seem relatively rational.

Finally James Thomas put forward the case for the former doctor Andrew Wakefield whose unethical, deeply flawed and now discredited study into the possible links between childhood autism and the MMR vaccination was at the root of the current rise in vaccination preventable diseases. We considered Wakefield's study and methods and pondered his finical interest in an alternative single vaccine.

All candidates fared well in the voting, but it became clear that the one thing the good thinking people of Winchester really can't stand is a doctor who blatantly and knowing abandons and abuses the scientific method in pursuit of personal notoriety and wealth. Winchester Skeptics are pleased to nominate Andrew Wakefield for the inaugural Golden Duck Award and delighted that he's walked off with the award.
Posted by Crispian Jago at Sunday, December 23, 2012 4 comments: