Tarot cards have been used for centuries as a divination method. Many Skeptics and rational thinkers however have claimed that there is no scientific evidence to support the validity of this method. I have therefore drawn up a new pack of Tarot Cards for the more sceptically minded. To practice my new art of Tarot reading, simply find yourself a believer and get them to select a card. To help you out I have posted 12 sample cards below together with my interpretation of each cards meaning. 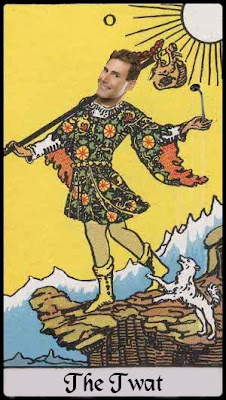 You have a strong tendency to base your career on deception. However, you’ve dug yourself in too deep now. You feel like you may be conceived as an even bigger twat if you come clean, so best continue to attribute your cheap tricks to psychic powers. If you have trouble finding enough people to still believe that your basic parlour tricks are not illusions, then why not exploit the New Age market. You just need to mention Crystal Power, ESP or Dowsing and their sure to lap it up. You may occasionally receive visions, but do not worry; these are probably just extraterrestrials bestowing more powers upon you. 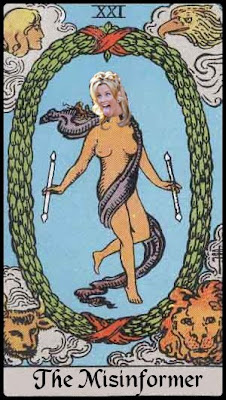 Alas your brain has been addled with a constant wash of twaddle. Rather than understand the science behind the issues that concern you, use your maternal instincts to make sense of things. Do not worry if your instincts fart in the face of science and reason, seek to promote them as best you can. Perhaps an alliance with the Queen of Fuckwits could prove a suitable platform from which to spout your gibberish. Try not to worry too much about the consequences of your actions or you might you have trouble sleeping.

The Queen Of Fuckwits 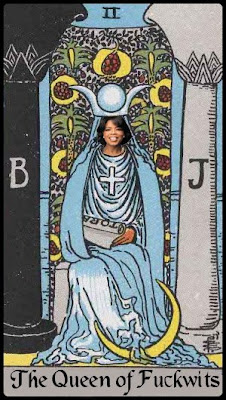 You have a nose for bullshit and are able to sniff out vast piles of steaming crap. You are able to disseminate your bullshit across America like a gigantic, inexorable muck spreader tainting all those in its wake with your distinctive pseudoscientific endorsements. You’re confused as to whether you should follow nonsensical Christian dogmas or absurd new age thoughts, as both contain much irrationality you find yourself unable to choose between them. You could choose to use your talents, riches and influence for good but heck, there’s a fresh pile of poo to throw. 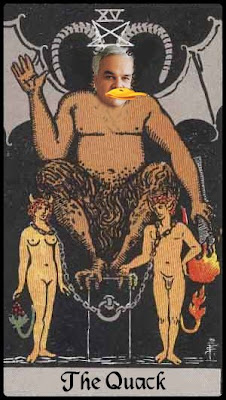 You have come to realise that modern scientifically developed, trialled and approved medicines could only possibly be created for the profit of large pharmaceutical companies. They can never therefore be as effective as simple multi-vitamin pills. Why not put your knowledge to use by publically claiming that vitamin pills are more effective at treating cancer than chemotherapy and the “poisonous compounds” used by conventional medicines. Better still; why not take advantage of the ignorance of a South African president who believes that HIV does not cause AIDS. Perhaps you could peddle a few vitamin pills in place of anti-retroviral drugs that are clearly just poisonous and a conspiracy to kill and make money. Maybe a slogan like “Stop AIDS Genocide by the Drugs Cartel” could help shift a few more vitamin pills at the insignificant cost of say 171,000 new HIV infections and perhaps 343,000 deaths. 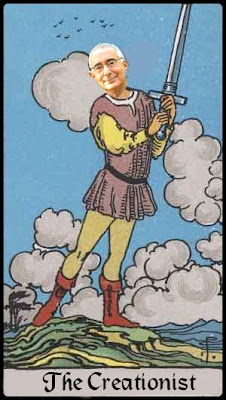 The best way to determine the truth is to make your mind up based on a single ancient, pre-enlightened, arbitrary book of your choice. Do not worry if your predetermined truths do not turn out to fit with later discovered facts. If you work backwards from your preordained decision it will become easy to ignore the vast sways of evidence that contradicts you and allow you to easily invent “theories” to support your decision. Avoid making movies at all costs. 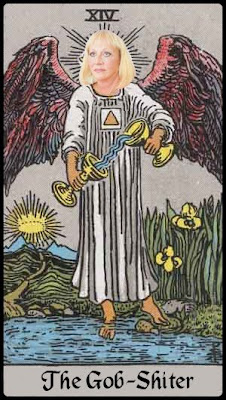 Be careful what you say, remember some people may believe your vile gob-shite. You could continue to use your special powers for good by assisting the FBI as a psychic detective. However try not to be despondent because out of your 35 cases to date, in 21 the details you provided were too vague to be verified and that for the remaining 14, you played no useful role. I’m sure the fact that you pleaded no contest to securities fraud and were indicted on grand larceny will not affect your popularity. Especially as these crimes pale into insignificance compared to telling a desperate couple on the Montel Williams show that their missing son was dead, even though he later turned up alive. 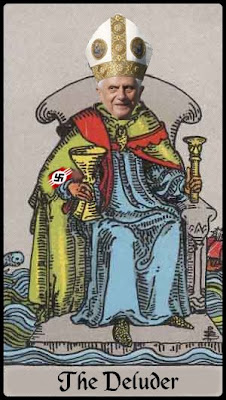 Your life is controlled by a dogmatic adherence to an ancient understanding of the universe. You are a person with the ability to influence the ethics and morality of others, yet you base your own morality on 2,000-year-old scriptures that commend slavery, homophobia, and female subjugation. When science reveals flaws in your beliefs you are no longer able to simply persecute the enlightened as heretics. However you can always just invent new creeds, but do not worry if they seem ridiculous now, with time and tradition they will become accepted and the more ludicrous they sound, the more virtuous the believers can feel. BTW your cock may well be allergic to latex. 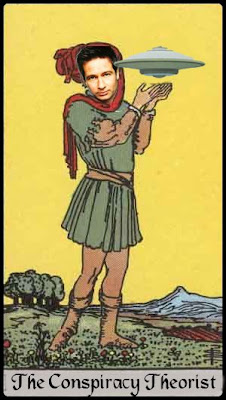 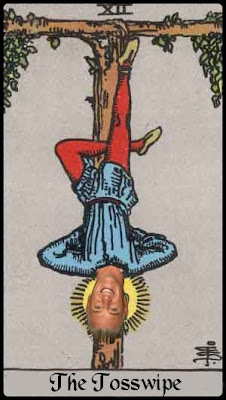 Humour is one of your strong suits but always remember that they are not laughing with you, they are laughing at you. When things aren’t going too well, the situation can always be remedied by pretending to be possessed by a spirit whose names is an anagram of “Derek Faker”. Always research your subjects and locations thoroughly as this may aide your psychic abilities. Try not to make sudden movements or noises when in the presence of ex Blue Peter presenters, there is always a danger that they might inadvertently shit themselves.


The Prince of Woo’s 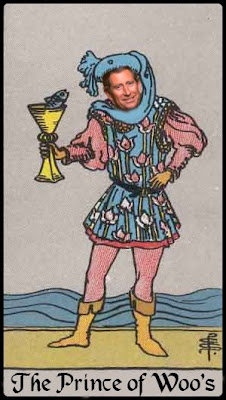 You should follow the example of your mother and learn how to keep your mouth shut. Your privileged position in society is tolerated due to a public desire for tradition, pageantry and tourist dollars, not through agreement with your kooky views. Why not try my special recipe homeopathic tincture. It’s made from a drop of water that has been in contact with a ladies vagina. That special water droplet is then diluted until no trace of the original special molecules remain. The resulting tincture is guaranteed to stop you being a twat. 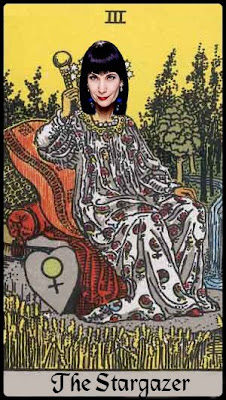 You are so arrogant as to believe that the relative positions of the celestial bodies at the time of your birth determine your personality traits and the future life events of yourself and all humanity. Although most people may now see the absurdity of your claims, the desperation of those seeking love, health and wealth may draw them to your ramblings. As you relate the vastness of the universe and the positions of stars and galaxies to your own personal fate you should under no circumstances whatsoever, enter the Total Perspective Mind Vortex. If however you are open to a new fully updated version of divinity based on similar logic to astrology, why not check out my shitoscopes. BTW, why have you never won the lottery? 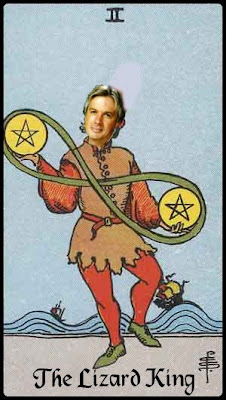 What’s that you say, “The Illuminati are a race of reptilian humanoids that secretly rule the world?” Have you not taken your medication today? NURSE, NURSE, he’s out of bed again. There, there, calm down now, the nice man in the white coat is going to drive you home.

Actually, I don’t know why I’m being so mean, he’s easily the most likable character in my deck of Tarot cards.


Notes:
For further information on “The Quack” please refer to Ben Goldacre’s Bad Science column and blog. Download the free chapter.
For further information on the misinformer please visit StopJenny
The image used for the Stargazer represents astrologers in general and not the specific astrologer in the image
The image used for the Conspiracy Theorist is of Fox Mulder and not the actor David Duchovny
Thanks for Rebecca Watson’s 2008 Jackasses
Posted by Crispian Jago at Saturday, May 09, 2009

The more you promote a "rational zeitgeist" with your arrogant and smug derision, the more you empower us "irrational quacks."

Thanks for reading and commenting. All comments are most welcomed and it’s great to hear one from an alternative point of view.

I love it when quacks talk like they're Black Panthers.

The truth of a proposition doesn't depend on the arrogance or smugness of the person saying it. The question is this: is the idea something that we have discovered about life, the universe and everything, or is it not. For those of us who truly care about the pursuit of truth and knowledge at all costs and against all hazards, I say this: feel empowered if you like. Believing ideas to be true is as morally wrong as believing without evidence that a defendant is guilty. The only correct way to respond to the mystery of everything is to step away from ideas that require belief, reject them, and be prepared to accept whatsoever is true. Unfortunately lots of people like to fight for their favourite ideas, like the stubborn, prejudiced jurors in 12 angry men.

Thanks for the wise words of the last anonymous commenter. I suspect I recognise the author from the writing style ☺

This is funny! I especially like the Ben Stein Creationist card. One thing I want to point out is that tarot cards haven't always been used for divination.
According to recent playing card research, these cards were originally intended for a type of card game similar to bridge or spades. The Major Arcana was meant to be a trump suit.
People today especially in places like France, Austria and Italy play variants of this tarot card game and because of the internet some Americans like me are starting to learn these games. The tarot has no demonstrable roots in occultism. The original symbolism is actually based on Catholicism. The cards first appeared in 15th century Italy and they would not be used for divination until the 18th century when occult writers wrongly linked the cards to Egypt and Kabbalah.
I think it would be a good thing if the media would report the fact that those cards were originally made for games and not predicting futures when they do their reports on so-called "psychics" reading tarot cards.

Thanks for the information on the history of Tarot Cards. I wasn't aware of that. Cheers

We have just added your latest post "The Skeptics Tarot Cards" to our Directory of Science . You can check the inclusion of the post here . We are delighted to invite you to submit all your future posts to the directory and get a huge base of visitors to your website.

I remember meeting you a couple of times at ImagoQA drinks and having a good old yak about music. Pity I didn't know you were a huge skeptic as we could have had some interesting discussions.

It seems as though you are becoming a semi-regular feature on the Sensing Murder forums in NZ as this latest post of yours has also been linked to there.

Very funny, though I will just draw your attention to an entertaining point of history.

Did you know that tarot cards were actually created for card games? They consist of two parts: a standard pack of Latin suited playing cards and a fifth suit of picture cards. The extra cards took as their theme a triumph procession, hence their early name of triofi, meaning triumphs and from which we get our word trump!

For 350 years the cards were used for nothing but games and for 100 years, the fortune telling was limited to just France. The games continue to be played today throughout much of Europe.

It makes a handy tool for the skeptic - get out the tarot cards at the pub, student bar, a party, or whatever, and teach people to play a game with them - it's fun and lets you preach a skeptical line without people rolling their eyes.