Like all kids, I occasionally caught a cold or mild flu that laid me up for a while and secured me a few precious days off school. After lounging around in bed for a bit, I was invariably back to my usual self. However whilst lying in bed moaning and feeling sick, I always used to ask my mum for a glass of Lucozade.

In those days you only got Lucozade when you were sick, so it was a bit of a treat and I was especially fond of the stuff. Other than being high in glucose and presumably therefore being relatively good at replacing energy, there is no scientific evidence that I am aware of, to make me believe that Lucozade has any active ingredients that combat the symptoms of cold and flu. Furthermore, I don’t think the company that makes it, claims that it does. It’s just a nice energy drink.

The logical fallacy of confusing correlation for causation is, I suspect, an easy trap for children to fall into. I also suspect this is the fallacy at the root of many superstitions and irrational beliefs in pseudo medicines, paranormal phenomenon and even, in a more complex way, religions. I think my faith in Lucozade when I was a kid was harmless and benign enough. However it must have had a single point of origin that is now lost in the mysts of time. Some sympathetic adult must have given me some Lucozade at some point to initiate the first correlation.

But what if my parents had other beliefs? To demonstrate the randomness of an arbitrary parental belief passed onto their children I have created the following die: 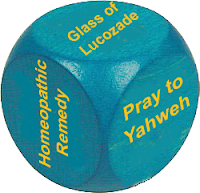 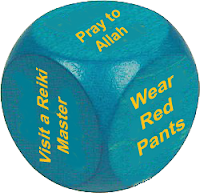 Ha... :) And I had the opposite situation in childhood. When I was in my first kindergarten (I was 3 y.o. and it was little kindergarten in remote village), children liked to try one sweet officinal mixture like some delicacy. It consisted of Serpylli herbae extract + Potassium bromide + sugar syrup. Enough harmless children's medicine for a cough. This stuff seemed very tasty to unspoilt rural children , though I (daughter of Head of local hospital) hated this mixture because of specific smack of thyme. And later, in the pioneer camp (I was 7 y.o.) children had penetrated once into medical station, when the doctor was absent there (by the way, the doctor was my mom ;) ) and had eaten away all vitamin C as some bonbons (note - children knew excellently about both sweet-sour taste and medical properties of this vitamin, including the knowledge that overdosage would be practically harmless!).
In brief, an anti-quackery simply prospered in USSR ... :)

Lucozade is beneficial if your illness causes you to lose electrolytes. Vomiting, diahorrea and inabilty to eat would all be a problem here.

I'm not sure about flu though - maybe it was just nice to have a sweet soft drink.

Your die is a great idea.
When my children were poorly they were offered the comfort and security of the 'Magic Dressing-Gown'. Its efficacy was unrivalled at making them feel cuddled and loved yet the concept was ridiculous enough to avoid any side-effects polluting their rational thought processes.

I used to have a lot of stomach problems and took up drinking mint tea for them. It helped a little - not that I particularly like it. But then I decided to try some when I felt fine - and it made me feel ill! Perhaps it was simply a sort of ingrained correlation.

I don't think I ever got much medicine when I was ill as a little kid - my parents were doctors. And I don't think I've ever even drunk Lucozade. Aaaaahhh, the gaping chasms!