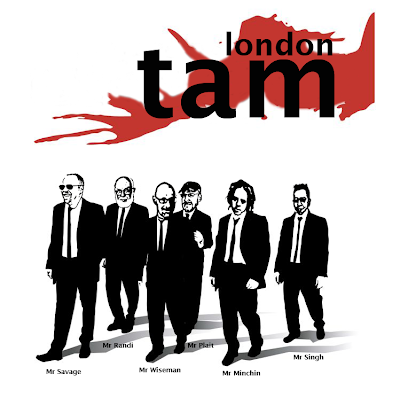 CLICK TO ENLARGE
Firstly apologies to the speakers for not using their official titles, but you know "Mr" fitted in better. Anyway, as much as I was looking forward to seeing Richard Dawkins at TAM London, news of his unavailability could not have been softened better than the addition of Tim Minchin to the line up.

However, this meant that my previous TAM London Photoshop effort had to be redone.

See you there guys
Posted by Crispian Jago at Saturday, June 06, 2009

It's a shame Richard Dawkins can't make TAM London, but I console myself with the fact that I saw him today at the BHA Darwin, Humanism & Science event at Conway Hall.

Thanks for the comment Paul, I was sorry I couldn’t make it Conway Hall today to see Dawkins. Last time I met him there, we had a brief conversation. Transcript below:

I might go for two words next time I see him

Damn, so wish I was going!

Nice plug from Phil at BadAstronomy!

All men (white?). No women skeptics?

Don,
The gorgeous, intelligent and witty Ariane Sherine is also talking at TAM London, perhaps I could photoshop her over Uma Thurman on the Pulp Fiction poster