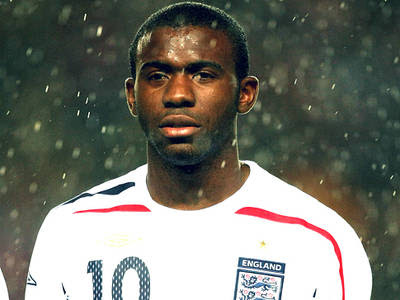 When Bolton Wanders midfielder Fabrice Muamba suffered a cardiac arrest and collapsed during the FA Cup quarter-final tie again Tottenham on 17th March 2012, all right-minded and compassionate individuals understandably wished him well and hoped for a speedy recovery.

The succinct phrase or sound bite that quickly gained traction to raise awareness of Fabrice's condition, and to perhaps provide some well-meaning thoughts on how best to help was the twitter hashtag #PrayForMuamba.

I am unsure if many people use the phrase "pray for" as a vernacular term for "think about", "feel compassionate towards" or "hope the best for" or whether people genuinely use the term as a literal petition for supernatural intervention. Perhaps the English language simply lacks a suitable rational verb to convey a more enlightened interpretation of the term pray without losing the warmth, empathy and tenderness associated with the established religious term.

Whether or not the term was used in a literal sense or not, I have a problem with the concept of prayer. If there is no God, or if the god or gods are impotent in the powers required to intervene with human affairs, then prayer is ultimately futile and pointless. If there is an all powerful divine entity with the ability to intervene and alleviate human pain and suffering, then I am concerned as to why he waits to be asked. I am not prepared to plead to a God who is perfectly willing to allow pain and misery to continue unabated until some sycophantic  acolyte sees fit to ask him nicely enough. Hence I find it far more comforting to conclude that the inventors of Christianity created themselves a vindictive and ambivalent deity desperate for praise and adulation from their own fear and ignorance than to believe that I will one day have to answer to such a tyrannical despot.

For this reason I thought prayer a highly unsuitable solution to Fabrice Muamba predicament and rather than hope for capricious divine intervention, I hoped that medial science would be able to successfully intervene. However, I considered it ill-advised to criticise the hashtag at the time of the incident as any criticism of the method would certainly be falsely misconstrued as a lack of concern or care in Fabrice Muamba's condition.

I was of course delighted that a month after Fabrice's heart had stopped beating naturally for just over an hour, he was discharged from the London Chest Hospital and in a statement released by the hospital said "“I would like to take this opportunity to pay tribute to every single member of staff who played a part in my care".

Subsequent examination of the phenomenon of the use of the word prayer in such circumstances raises several questions though. Is it just a turn of phrase? Do we have an inbuilt irrational mechanism to revert to supernatural pleading in times of crises? And why do the people who still choose to credit God, rather than the Hospital staff, for Fabrice's recovery not stop to consider why God saw fit to stop his heart in the first place. But of course the ultimate question it raises is: Does prayer actually work?

Many serious studies have been conducted into providing a scientific answer to this question. Analysis of the results of the studies of the efficacy of intercessory prayer has mainly concluded that there is no discernible effect. However some less rigorous studies have shown a slight effect (some positive and some detrimental). In cases were prayed for patients fared slightly worse than non-prayed for patients, Richard Dawkins has suggested that the added pressure and anxiety of prayed for patients can have a small negative effect. Conversely it could be argued that a purely natural placebo effect could also have small positive effect if not properly controlled for.

Ultimately though science and religion disagree on the efficacy of intercessory prayer. To date, science has no reliable evidence to support any discernible effect whatsoever for prayer and religion is more than happy to take random anecdotal evidence and statistically expected chance outcomes as sufficient proof. Furthermore, many religionists simply dismiss the unpalatable conclusion of scientific trials showing no efficacy for prayer on the grounds that such answers cannot be determined by science. Preferring instead to believe that their all powerful supreme power would rather ignore scientifically controlled prayers (and thus choose not to prevent death and suffering) than being tricked into be proven to exist. Not entirely unlike Douglas Adams' Babel fish conundrum.

However, new evidence recently plucked from my arse has at last shown a proven scientific effect for prayer. The problem with all the previous studies is that science has been looking for the results in the wrong place. There is obviously no change in the outcome of the patient or person being prayed for, celestial appeal is not one of the myriad of variables at play in the ultimate outcome. There is though, a not insignificant effect in the state of the actual person doing the praying. We all like to think we can contribute to a better outcome, we like to think we've played our part, we like to delude ourselves that we have helped make a difference. Even if we've done fuck-all to actively contribute to a successful outcome we'd still like a little bit of credit, and this is where the true power of prayer lies.

In a completely fabricated study, we measured ten attributes of patients before and after prayer and recorded the percentage increase in each attribute. The following graph shows the unequivocal significant discernible effect of the power of prayer. 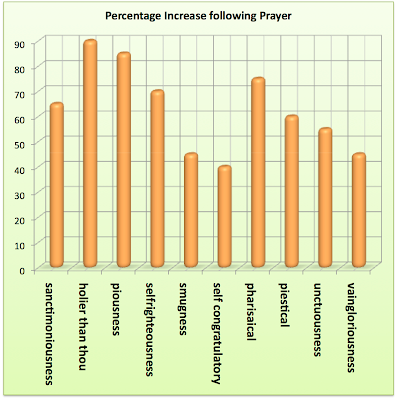 Incidentally, if you've recently realised the futility of prayer and are missing some of the personal effects described above, can I recommend becoming a blood donor. It works a treat.
Posted by Crispian Jago at Saturday, April 28, 2012

Email ThisBlogThis!Share to TwitterShare to FacebookShare to Pinterest
Labels: Prayer

Being a bit dyslexic, imagine my embarrassment when I showed up to Mr Muamba's hospital room dragging the carcasses of two Antelopes and a Wildebeest.

I had a similar problem a few years ago whilst trying to convince my then girlfriend that dieting on wild game alone was a good idea. True, I had not read Elizabeth Gilbert's book but the title was appealing. Eat Prey, Love.

"...can I recommend becoming a blood donor. It works a treat.

Depending on your theologian of choice, prayer reflects on oneself rather than the object of the prayer. By praying for this ball kicker you are following God's instructions to love one's neighbour, etc, etc rather than actually interceding on the prayee's behalf. Of course, if you understand this, then your prayer is inherently selfish. I haven't yet found anyone who can explain this oxymoron.

FYI: My favourite theologian is Screwtape.