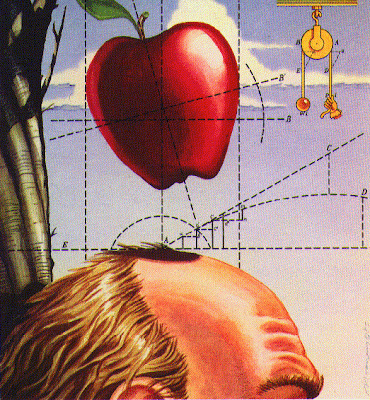 An imam has retracted statements about gravity after death threats were made against him.
Dr Usama Hasan, a science lecturer, has voluntarily suspended his role in taking Friday prayers at Leyton Mosque in east London.
He said he went too far in the way he defended the theory of gravity.
He acknowledged many British Muslims believe in anti-gravitisim, adding that he intended only to begin a debate.
He wrote that there were many Muslim physicists who had no doubt about the essential correctness of gravitational theory and he added: "Many believers in God have no problem with an obvious solution: that God makes things fall via the force of gravity."
Dr Hasan wrote: "Snazzy websites, videos and books produced by fundamentalist Muslim 'anti-gravitists' such as those at www.harunyahya.com, are obscuring clear scientific thinking."
He also wrote: "One problem is that many Muslims retain the simple picture that things stay where they are put until the will of Allah mysteriously moves them somewhere else (usually towards an object of greater mass).
"This is a children's madrasa-level understanding and Muslims really have to move on as adults and intellectuals."
Dr Hasan, who is vice chairman of Leyton Mosque - which houses one of the country's largest sharia courts - has agreed he went too far in suggesting that that the apple fell on Isaac Newton’s head due to the ungodly heathen force of gravity.
Thank God fundamentalists Christians aren’t this stupid… D’oh
Article based on this story from the BBC News Website by simply replacing once scientific theory with another of equal validity.
Posted by Crispian Jago at Monday, March 07, 2011

You know the scary part about this? I didn't realize it was a joke until I got to the bottom. As a rule, I never underestimate the stupidity of theists.


LOOK at the CORNFIELD

Modus Operandi of Radhasoami Faith View of Creation – Part II
Here the true Jaman (coagulant) was given. The spirituality coagulated as it were, and Surats (spirit entities), among themselves, brought the creation into being. Thereafter, another Jaman (coagulant) was given. Regions from Agam Lok (Inaccessible Region) to Sat Lok (True Region) were created during the first creational process. That creation is true. That region is eternal. There is no trace of evil and suffering. This was the creation for many Yugas and ages. Then there appeared a dark coloured current
That current appeared like a dark coloured stone set in a white one and was absorbed in the Darshan of True Being. Then there appeared two Kalas i.e. currents (viz. Niranjan and Jyoti) and they together evolved the creation of five Tattwas (elements) four Khans (species, categories of life) and three Gunas (qualities). The three Gunas (qualities) brought about the expansion and proliferation . They created Rishis and Munis (sages and holy men), gods and godly human beings and demons. Egotism then increased much. Niranjan separated himself from the rest, putting the burden of looking after the creation on them. Nobody could know of Niranjan. Even the Vedas referred to Him as Neti Neti (Not this, Not this). They did not get Darshan (Vision) of Niranjan. They made conjectures. Then how can anybody have knowledge of Sat Purush (True Being), Source of Niranjan and all that exists. (Source: Sar Bachan Poetry)