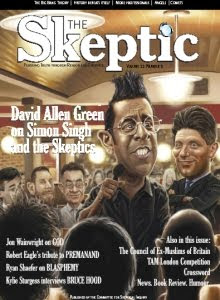 So a couple of months ago I got an email from the Editor of the Skeptic magazine asking if I could help with the cover design again.

The main article was a piece by the legal blogger and lawyer David Allen Green on Simon Singh and the now infamous misconceived libel case brought by the British Chiropractic Association.

I immediately had an idea of what the cover should look like.

Looking back on the events that eventually led to the BCA's final capitulation, the clear turning point was way back at the support rally meeting held in The Pendrell's Oak Pub on the 18th May 2009.

At that meeting I sat quietly in a privileged position behind the main speakers next to Richard Wiseman. I took a few shaky photographs on my iPhone, and later edited together some video footage took by Nick Pullar, that helped me form a clear image of what the cover should be.

In my minds eye, I could see Simon with the microphone, and David watching from the wings, pin-stripe suited, arms folded and quietly smiling to himself. I could see Brian Cox in the front row, and Chris French, Dave Gorman and Evan Harris behind the speaker. As these were all characters that had recently had the Skeptic Trump treatment I pictured them wearing their skeptic caricature faces.

I thought I could perhaps salvage some of the photo's and video footage and photoshop on Neil Davies' artwork. I rang Neil, to ask for his permission to reuse the images for the cover. Neil pointed out that the lighting would be all wrong, but said he he would be happy to paint the scene from scratch.

I explained the concept to Neil, and over the following weekend he emailed me constant updates of the work in progress as the image in my minds eye gradually emerged on my computer through Neil's talent.

I think the final painting is a complete triumph and a perfect facsimile of what I had originally envisaged. So here is the full unadulterated copy of the picture on the cover of the current issue of The Skeptic magazine. 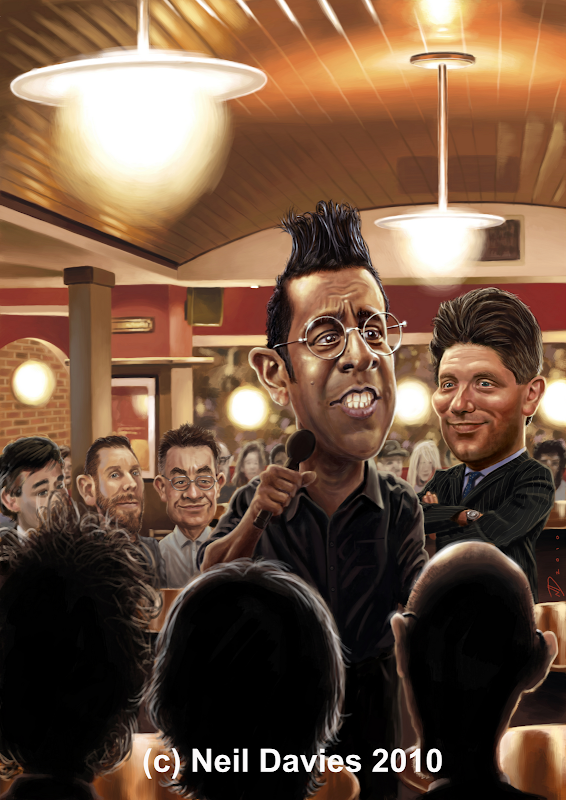 Check out Neil's blog where you can buy a high resolution, limited edition print signed by the artist.
Posted by Crispian Jago at Friday, September 24, 2010

It's beautiful! Very well done all of you! :)

I was delighted to get a signed limited edition copy of this for Christmas :-)