On the Origin of the Modern Science Map 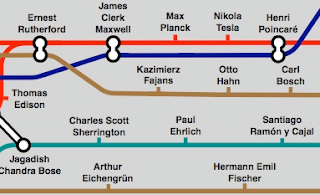 The origin of the Map of Modern Science is not as noble as I would wish.

Flushed with the success of my Periodic Table of Irrational Nonsense, I started to consider what other iconic image I could bastardise in order to promote my pro-reason agenda. The London Underground Map was the obvious candidate. After a quick Google to check no one had already commandeered this eminent image for the nefarious purposes of rationalist propaganda, I set about the task myself.

My initial concept was not in fact to restrict the map to modern science, but to show the ideas of the enlightenment and how they evolved out of the age of reason. I therefore embarked on the project with the grandiose idea of including politicians, authors, philosophers, scientists and indeed all the great thinkers (maybe even the odd theologian at a push), who have helped shape our modern understanding of the world.

It became clear from very early on that with the limitation of a single page map, (even a very large single page map and a tiny font); I could not delve into the level of detail I wanted and maintain such a wide remit. I therefore initially sketched out just 4 lines for 16th century Philosophy, Natural Philosophy, Astronomy and Natural History.

Philosophy remained on the map for a number of revisions, until it grew so large that I was forced to cull the entire line, and place it in my pending folder as a potential project for another time.

Having now in effect restricted myself to modern science, I thought it wise to define a clear boundary so that I wouldn’t end up discarding another major chunk of nugatory work. Having performed some rudimentary research on the major scientific disciplines I once again came to the conclusion that the topic was still too wide and narrowed my scope again to cover just the natural sciences.

With a more achievable purpose now defined I attempted to complete the one line I felt most comfortable with, Evolutionary Biology. This line seemed to work quite well, it had an obvious scientist at its root; I had a good idea of the major contributors and I had some ideas on where it would intersect with other disciplines such as palaeontology and genetics.

Other lines were more problematical; the London Underground Map is far from a perfect analogy for the history of modern science and as such I was forced to make a number of compromises.

Reality is not as clear-cut as my oversimplified map. In most cases the origins of a discipline cannot be wholly attributed to one scientist, as required by my selected format. Consequently I made a number of uncomfortable decisions on where best to split the lines, which disciplines to merge together for map clarity and which lines to place certain scientists on. These decisions are of course wholly subjective and the price I had to pay for a nice flowing single page map.

At this point I acknowledge the argument that ramming the square peg of scientists into the round hole of the London Underground Map renders the whole exercise fairly pointless. However, even if the result is too crude for serious science historians, I still hope the output retains enough honesty to make it a useful starting point for the exploration of the history of science to the interested layperson or intermediate geek.

Having progressed thus far, I paused to further research the scientists in the other disciplines that I needed to complete the map. I trawled the Internet for the major contributors in each discipline and compiled a large spreadsheet of well over a thousand names. I then worked my way through the list whittling it down to those scientists I felt had made the biggest advancements in their field.

As I have commented before, it seems rather perverse that I should wield the power of decision on who to include. Ruthlessly casting aside numerous great minds that I simply didn’t have the space to accommodate.

Having reviewed the list and assigned the lucky remaining scientists to the most suitable lines, the actual task of drawing the map was relatively straightforward. Although of course I habitually encountered the problem of not having a certain scientists near enough to a converging line, forcing me to continually reroute the lines.

Despite now restricting myself to the natural sciences, I found that many of the early scientists I had listed had crucial intersections with mathematics. Having linked these together I was then compelled to follow the mathematics line through to the present day thus extending my carefully constrained scope into one of the formal sciences.

The Mathematics line was therefore the last to be added. It is also the line for which I have received the most comments and suggestions for improvements; perhaps pointing to an area I should read up on a little more.

A number of key modern mathematicians I found myself including where in fact primarily computer scientists, forcing me to re-label the line to Mathematics and Computing. Although now that I look at the map again, I think that perhaps there is a need to split computing off onto its own line.

Other lines contain similar problems; Palaeontology and Geology would benefit from a split, Microbiology has inadvertently become a messy catch-all for all other biological scientists I wanted to include and my split of chemistry is probably not as logical as it could be. These are all potential improvements for a future version.

Another area of consideration was what to do with the more controversial scientists. Prominent Russian scientist Trofim Lysenko for example undoubtedly had an immense influence on society through his exalted position that enabled him to promote what can now been seen as pseudoscientific policies. After consideration I opted to simply leave him off the map.

Jean-Baptiste Lamarck on the other hand, despite being primarily remembered for the now discredited theory of inheritance of acquired characteristics as the mechanism for evolution, was nonetheless an early visionary and influential figure in the development of evolution biology. It is perhaps therefore a little disingenuous to shove him at the terminus of a dead-end line.

This opened me up to a criticism that I fully expected to receive. In anticipation of being derided for the inclusion science celebrities at the possible expense of omitting higher contributing but lesser-known scientists, I added a brief justification to the blurb on the side of the map. However to answer the criticism more fully, I do intend to include the worthy lesser-known scientists that my ignorance may have initially overlooked, that’s why I have invited your comments. However, I refuse to demote the science communicators I have already listed. Without the passion, enthusiasm and precious skill-set of science communicators like Carl Sagan, many of the scientists who will make the next breakthroughs may never have been inspired on that path in the first place.

So finally, as of version 1.1 there are a total of 477 scientists on my map, perhaps and arbitrary cap of 500 scientists in 500 years would be a reasonable limit to keep things readable.

Many thanks to everyone who suggested improvements to the map, I’m still working my way through them with the intention of a further update to the map later, but not before normal service of scathing skepdickery has been resumed.
Posted by Crispian Jago at Wednesday, September 08, 2010

Yes, yes, but will there be a T-shirt?

Seriously, it's great stuff and the huge amount of work is evident.

Great to hear how it developed - Intelligent design with evolutionary pressures.
Dammit, what did I just do there!

Yea man, there better be a T-Shirt or I will be forced to make my own.

But also, you are made of win. That is all.

I think the image may be a tad too big for a T-Shirt. But I will make it available on a poster and a PDF vector image download after I've made a few more updates.

In stead of using the underground map, why not use the internet map? This could be useful for showing influences between people/persons/times as connections between major hubs. Any network map would do but one of the internet could be fairly topical.

Interesting. On the Natural history (really, Ecology) front, though, you are correct. There are a lot of great communicators here, but few of whom have made any scientific contributions. Names to look at are Clements, Shelford, Gleason, Hutchinson (the concept of the niche!), Elton, May, McArthur, Paine, and Connell. Although that's just my biased view. One useful site for your research might be http://academictree.org/

Ask Billy Joel to put it in a song for you.

You've got Einstein under math and physics, but not under cosmology. I'd have to say his contributions to cosmology (General relativity) are far more significant than those in math (most notably notational improvements for tensors and summations).

Awesome graphic!! I know you can't include everyone, but I was surprised not to find George Whitesides under chemistry at least. http://en.wikipedia.org/wiki/George_M._Whitesides

Definitely needs to be a poster - I'd buy one.

This is a diagram, not a map. Symbolic representation, not topography.