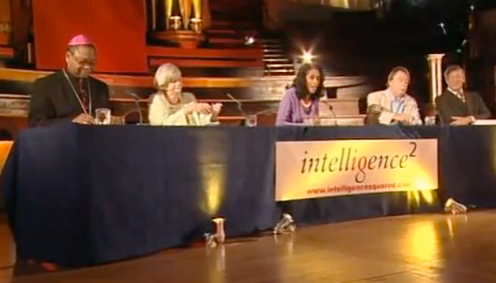 I have just been watching this recent Intelligence squared debate, recorded at Methodist Central Hall on Monday 19th October. The motion: “The Catholic Church is a force for good in the world” was supported by Anne Widdecombe MP and Archbishop John Onaiyekan and most eloquently and deftly opposed by Archatheist Christopher Hitches and National Treasure, Stephen Fry.

If you have seen the video or read the reports you will already know that it was a complete rout for the Enlightenment with Widdecombe and Onaiyekan receiving a damn good verbal kicking. A boxing referee may well have shown pity and called a halt to the proceedings after round 2, but Zeinab Badawi allowed the punch drunk Catholics to cling on to the ropes for the duration.

I was of course, delighted to hear Hitchens and Fry drawing attention to the long list of unequivocal harm proliferated and condoned by the Catholic Church, both in its long history and indeed now. And I was of course unsurprised that the Catholic apologists where unable to justify the inhumane actions of their Church and disappointed that they were also unwilling to apologise for them.

Despite a resounding victory for free thought in the final vote of the evening, I wanted to ensure that the one positive point offered by Widdecombe and Onaiyekan was not simply ignored in the heat of the battle.

The strongest argument put forward from the Catholic camp to support the motion was the undeniable massive amount of much needed aid and charity supplied by the Church. However, before looking at this, allow me to backtrack a few hundred years.

When the church had a complete strangle hold on society, it was free to bolster its numbers in foreign parts and spread the good word with a good old fashioned Crusade. Thankfully, in these enlightened times the majority of us can see the immorality in such an approach. If however the term Crusade still holds a little romance for you, try substituting it for Jihad, as its true meaning is much clearer when not blurred by you own particular belief system.

Eventually replacing crusades with missionary work seemed to provide a more acceptable non-violent evangelism for spreading the gospel to those not fortunate enough to have been born into the one true faith. Although once again with modern eyes we can see how breaking Star Trek’s prime directive is not especially wise, and interfering with local cultures and superstitions to simply replace them with alternative foreign myths and dogmas is not an especially virtuous occupation.

Today’s missionary work proceeds by wrapping much needed aid, desperately required in the developing world, in a religious package. This may superficially seem like a pretty good deal. Food, money and education can be distributed by compassionate well meaning individuals where it is most needed along with a message of an all loving God than may also bring hope to many people.

Sadly however, I suspect the God packaging that accompanies this aid is not as benign as we would hope. Seeding the currently dominant western religion spreads the doctrines and creeds based on the myths and superstitious at the root of that religion. An ancient revealed truth is by definition problematic to update in line with the modern world and therefore frequently at odds with liberal thinking, gender equality, tolerance and the extended morality embraced by a more progressive secular society.

To draw an analogy, I recall a conversation many years ago with a religious friend who explained to me why she was boycotting all Nestle products. She explained how their policy of providing free formula milk to new mothers in the third world provided useful and immediate benefit but in the long term created a troublesome dependency.

While some religious aid may well be distributed without strings attached, there is nonetheless a certain amount of religious packaging to much of the aid. The spread of these ideas must surely be the cause in many of the current problems experienced in the developing world.

To give two short examples:

A local Nigerian priest denouncing a 5 year old child as a witch due to his religious delusion rather than a logical understanding of causation and correlation is sadly far from an isolated event. This report from the Telegraph details how hundreds of children have been branded as witches, and before being pushed out of their homes, have been beaten, slashed with knives, thrown onto fires or had acid poured over them in an attempt to make them confess to being possessed by demons. A harrowing echo of the Inquisition in our own pre-enlightened times and a direct consequence of a warped religious mindset.

And of course, as Ann Widdecombe will be expecting me to mention, the papal misinformation concerning his supposedly infallible claim that condoms actually contribute to the spread of the HIV Aids virus. I could not think of a more fatally dangerous meme to propagate in countries rife with the HIV virus.


In the Intelliegence2 debate, Hitchens and Fry held a strong set of trump cards that made it virtually impossible for them to loose the debate in front of a rational thinking audience. But why not ensure that Rationality and Reason hold the full set of the trump cards.

I’m somewhat embarrassed by the fact that pious believers can point at comparatively miserly levels of secular aid. Can we not strive to ensure we gradually increase the level of no strings attached, non religious aid offered. I’ve no wish for people to withdraw their support for a religious charity if they don’t replace it with an equivalent secular donation. But hopefully more people will eventually want to donate for humanitarian reasons rather than religious reasons, and I think things are indeed moving in that direction.

So finally, a hat-tip to Ariane Sherine, who recently edited the delightful, The Atheists Guide to Christmas, a book whose proceeds will go to the Terrence Higgins Trust, and hopefully in some way counter the harm caused by Papal Propaganda.
Posted by Crispian Jago at Friday, November 13, 2009

Can we not strive to ensure we gradually increase the level of no strings attached, non religious aid offered.

And here's the main site:

Good post, it would be a much stronger argument for the Catholic Church if they just gave the aid to those in need without any strings attached, or indeed threaten to remove it for religious reasons as here: http://scienceblogs.com/pharyngula/2009/11/catholic_priorities_must_be_ma.php (from Pharyngula)

For an encouraging example of atheist charity, check out Kiva.org. The atheist team was the first to achieve $1M of micro-loans last month.

Surely there's a lot of secular aid, it's just not called that, because the people who do it are more concerned with helping people than with talking about their religion or lack of it...

I mean, I used to do volunteer work for Oxfam, and I still give money to them regularly. And I'm an atheist. And Oxfam is to all intents and purposes a secular charity - they were founded by Quakers, amongst other people, but there's nothing religious (or anti-religious) about what they do.

I posted this blog on the layscience site as well and got some similar comments. Including a comment citing research evidence of 80% of UK aid as non religous. Perhaps I was taken in by all the pious religous crowing, and shouldn't be so hard on my fellow humanists.