The Crudity of Early Home Computing

When the frustration of 1K home computing became all too much to bear, I (now regrettably) sold my Sinclair ZX81 for the princely sum of £10 and upgraded to the all singing and dancing Commodore 64.

Most of my friends however went for the lower spec'd SInclair ZX Spectrum. Although the C64 had far superior sound and a fancy way of overlapping sprites without all that colour clashing you got on the spectrum, I never really mastered the art of programming the bloody thing. All those tedious PEEKS and POKES of memory addresses was a whole bunch of no fun, and time that could be better spent waiting for a program to actually load from cassette.

The Spectrum however, with its keyboard, seemingly made from dead flesh, was a much easier piece of kit for me to get my head around.

Perhaps it was because the Spectrum's had its BASIC syntax written out before you on the actual keyboard. Sir Clive even had the wit to add a special shift key to allow the user to apply the relevant operands to extend the usage of the key commands. This made it fairly simply to string together a few lines whose semantics could be successfully interpreted and executed.

Although Sinclair's language constructs were certainly pioneering in their day, it all looks rather crude now. 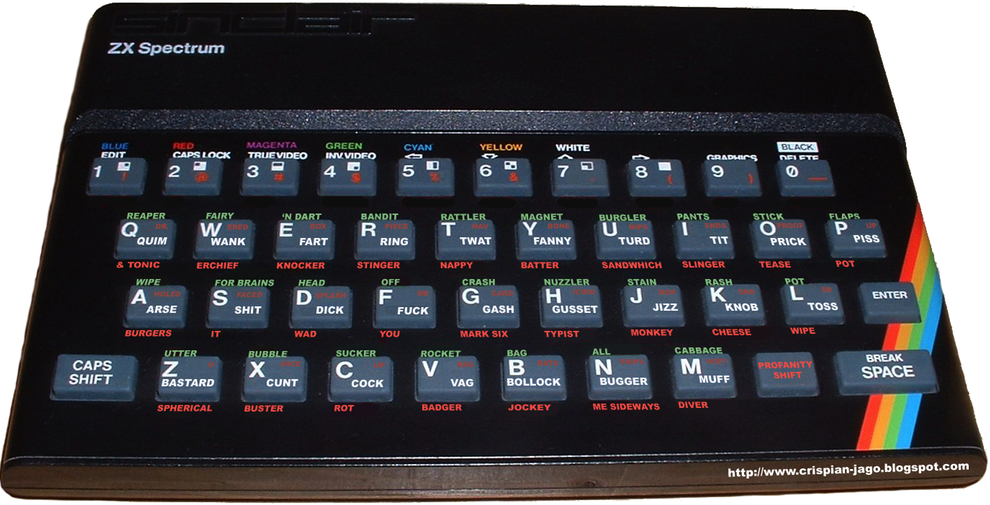 Gosh, those were the days. If you think that was crude, my first computer was a home-built wire-wrapped thing which I programmed in hex after assembling with a pencil! By comparison, the ZX Spectrum was a huge step forward - I even managed to write a digital circuit simulator on it in BASIC, though I lost it after the tape wouldn't re-load it. Happy days...

Well I don't know — some people just don't know they're born. When I were a lad we had to program on punched cards, which we punched with a blunt pair of scissors. The cards were then read by holding them up to the light of candle flame...

Ooh, you naughty tike. Methinks you have doctored that image slightly...

Certainly puts the "Ramming" in "Programming".

As my contribution to the "it was all better in my day, young whipper-snapper" I submit this:

Ah, Sean. Nostalgia ain't what it used to be.

And the famous book for "real programmers":

Programming in hex?
Whippersnappers!
I started out programming in binary (on switch panels) and the graduated to octal.
Hex?
I spit on you.