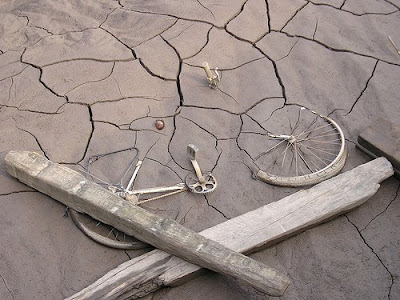 The Bicycle of Turin or Turin Bicycle (Italian: Bicicletta di Torino, Pedale Sacro) is a two wheeled vehicle propelled by foot pedals bearing the initials “J. H. C.”. It is kept in the royal chapel of the Cathedral of Saint John the Baptist in Turin, northern Italy.

The origins of the bicycle are the subject of intense debate among scientists, theologians, historians and researchers. Some contend that the vehicle is the actual bicycle used by Christ, as referred to in numerous literary references and still in common parlance today as an exclamation of surprise.
Many others contend that the artifact was created in the 1970’s at a factory in Worksop, as indicated by radiocarbon analysis performed in 1988 which placed the artifact between Tuesday and Thursday of the first week in September 1974. The Catholic Church has neither formally endorsed nor rejected the bicycle.
However, recent research and chemical tests have revealed that the actual pedal used for the 1988 radiocarbon dating was probably a replacement pedal refitted to the vehicle in the 1970’s by a kindly nun. Theologians have also concluded that the biblical accounts of Christ reveal much travelling and would suggest that the distance covered by Christ as relayed in the gospels are consistent with the need to replace the pedals, making the authenticity of the bicycle murkier than ever.
The infamous image of the original discovery of the Bicycle of Turin (visible in the photograph directly below the remains of the actual cross Christ was crucified on), has nonetheless been criticised by many archaeologists as unreliable having been originally published by a satirical blogger on his lunch break shortly after performing a Google image search.
Posted by Crispian Jago at Thursday, January 13, 2011

Thanks for the lunchtime grin!

If you ever decide to start your own church, I so want to join.

I understand and support your point... but you should respect italian language.

"Bicycle of Turin" is the english translation of "bicicletta di Torino". Also "Sacra Pedale" means nothing in Italian. If something similar would exist... it would be named "il pedale sacro".

I hate every church.

But I also hate who insults the italian language, my mother tongue.

A clumsy Google translate led me to believe the translation of "holy pedal" to be "Sacra Pedale", if this is wrong, please tell me the correct translation and I'll happily update it.

An Italian once told me off for calling pasta pasta, saying it means nothing in his language. They should hear the abuse my mother tongue gets from its own speakers.

the end of atheism - only the blind and deaf can deny it...


an example and warning of the fate of those who try to divide people....

Speaking of insults to language, look who's spamming this thread.

I confirm what Mauro wrote; in italian, the correct translations are "Bicicletta di Torino" and "Pedale Sacro".

OMG, I have this card in my wallet from the Church of Jesus H Christ on a Bicycle! I wonder if they're connected?

I wonder if they used the spokes from the back wheel to help in making the crown of thorns? LOL