I had a rather nice surprise when I settled into my seat for for the second day of the TAM London Skeptics Conference this morning.

I looked up in the packed auditorium to see to words "Would Crispian Jago Please stand up" in large friendly letters on the main screen behind the stage.

As I stood up, this appeared: 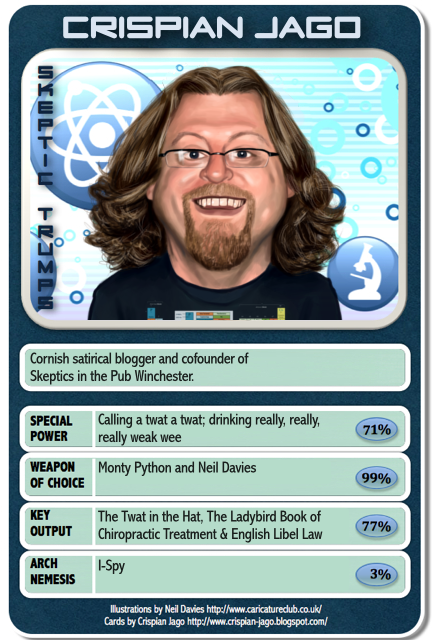 I received a full confession from Daniel Pope shortly afterwards.

Many thanks to Neil Davies for secretly drawing my caricature, Simon Perry for putting the image on the screen and of course Dan for planning and creating the card itself. (He even managed to track down the obscure font I used at the top of the cards).

And I'm even wearing my Periodic Table of Irrational Nonsense T-Shirt!

Thanks guys.
Posted by Crispian Jago at Sunday, October 17, 2010

That's brilliant.
The T-shirt is a wonderful touch too!
Fab that you're finally included in the Skeptic Trumps set where you obviously should have been for ages but clearly couldn't include yourself.

About time! Are you going to produce a set for sale at the next TAM? Put me down for a couple of dozen packs

Wonderful!! And definitely the winner of the cutest pic. :)

Not sure how I feel about being your 'weapon' though ;)

Whoops, there goes the neighbourhood ;-)

Hey, I didn't know you were Cornish.

The deck is a great idea and great work!
But you should definetly add the german philosopher and executive spokesman of the "Giordano Bruno foundation", Michael Schmidt-Salomon!