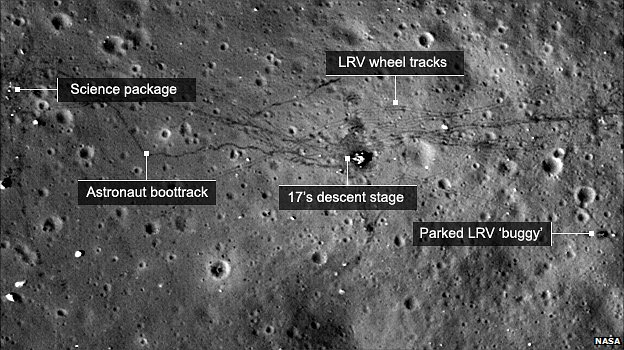 As interesting and fascinating as this weeks lunar photographs showing the Apollo landing sites are, they are as much use as tits on a bull when it comes to convincing moon landing deniers of the reality of those epic and pioneering missions.

If a belief has been uncritically adopted because it aligns with existing beliefs and assumptions, was communicated by an articulate authority figure to impressionable ears, or simply panders to the subjects inbuilt paranoia, then logical reasoned arguments and even photographic evidence will struggle to overturn them.

Such beliefs become even harder to overturn as they become entrenched over time as believers invest more and more personal stock in that belief. Indeed believers are able to add more and more ridiculous beliefs to their arsenal as their initial foundations become more solidified. This is the principal deviously employed by scientology. No one in their right mind can be pulled off the street and made to believe that they are inhabited by the tortured souls of dead aliens who came to earth long ago in a big ass spaceship. This is precisely why scientology sought to restrict such information to those believers who had progressed their credulity far enough to uncritically accept such ideas. By spoon feeding nonsense in small increments it eventually becomes possible to believe in the most outlandish nonsense.

In much the same way creationism, homophobia and female subjugation can sit firmly on the solid foundation of more mainstream and acceptable religious beliefs. Moon landing denial is another example of a rather silly belief taking root on the foundations of other conspiracy “theories” which in turn often sit on perfectly plausible conspiracies. As a general rule of thumb the addition of the qualifier “theory” is usually a good demarcation marker as to when things get a bit silly.

Back to the point. Having developed and embroidered a rather nutty idea (such as moon landing denial) and spending years shoring it up with cherry picked anecdotes, it becomes a matter of routine to simply bat away any inconvenient and incontrovertible evidence that would at first sight appear to piss on that theory. In fact the more ridiculous the belief, the easier it becomes to invent ridiculous excuses to explain away inconvenient truths. I’m sure the conspiracy theory message boards will already be rammed with comments from believers claiming that NASA are “in” on the conspiracy and the photographs are therefore clearly photoshopped. Presumably there’ll be some much more elaborate excuses too.

There are countless examples of frauds and charlatans who've methods have been clearly exposed, yet the faithful continue to follow undeterred. So I suspect that even If the most ardent moon landing denialist was physically taken to the moon and shown the Apollo landing site first hand, he would no doubt still claim he'd been in a flight simulator and a film set.
Posted by Crispian Jago at Thursday, September 08, 2011

I fear you are right. Your comments are bang on the money.

Now to sit back and await the arrival of the insane clown posse.

Denialism becomes a point of pride with certain people, too. They join a small, select group of people who have inside information -- knowledge that the general population lacks. And the mockery and ridicule they receive tends to reinforce the sense of community and belonging that they feel. Not that we shouldn't continue to mock and ridicule ...

(But what I want to know is who's really behind all these conspiracy theories?)

John, I think it's pretty obvious that it's Snopes.com behind all the conspiracy theories. After all, who else has so much to gain?

That's clearly a doctored picture of a cornflake taken through an electron microscope. It's no coincidence either that NASA published this picture just ahead of the tenth anniversary of 9/11. Using a cover-up to cover up a cover-up. Those Illuminati are clever buggers.

This is the college essay that I was looking for