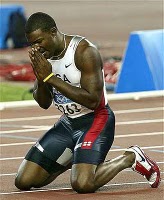 Great Britain's athletes are being warned about the risks of seeking divine intervention in the build-up to the 2012 Olympics.

It is this sort of thing that UK Anti Wishful Thinking Agency is keen to help athletes avoid as the time approaches when the eyes of the sporting world will be focused on London.

Surveys have shown that one in ten British athletes have at one time or other dabbled with performance enhancing prayers in the hope of gaining a slight edge over their competitors. Many athletes believe that the all powerful deity of their choice will be willing to influence the outcome of sporting events to their advantage and the detriment of their fellow athletes, if they ask nicely enough.

A spokeswoman for the UK Anti Wishful Thinking Agency stated that prayer abuse has been rife in many sports for years but due to the inability to record any actual measurable differences in those athletes using divine intervention, it has always been hard to prosecute.

In the run up to the London 2012 Olympics athletes are being warned that the prayer-testing authorities are being extra vigilant and will be keeping an eye out for the tell-tale signs of illegal performance enhancing prayers such as the possession of rosary beads, a travel rug or the excessive head-butting of tall walls.

With many prayers readily available these days in high street churches and mosques it is all too easy for unsuspecting young athletes to get access to mystic mantras and celestial appeals that they do not realise are on the World Supernatural Pleading Prohibited list.

The UK Anti Wishful Thinking Agency will be working with many young British athletes over the coming months to educate them in basic critical thinking techniques to ensure they do not fall foul of these strict anti prayer regulations. A spokeswoman for the agency stated:

'I think it's something that everyone would agree with and is an aim for everyone involved in sport - to make it as incredulous as possible. That is what we are all working towards.'

Science Reason & Critical Thinking wish all our athletes the very best of British and advise them to keep their heads up and their hands apart.
Posted by Crispian Jago at Tuesday, September 13, 2011

It is impossible for any Christian prayer to be *unfairly* performance enhancing. Any such prayer will either explicitly or implicitly include the words "Thy will be done."

To suggest that it might be the Will of God unfairly to enhance the performance of one nation or one athlete, for example by making him/her a *faster runner*, is antithetical to the idea of a God who is Perfect Love.

How can we understand this divine mystery? Surely God chooses some athletes - at random - to propel to victory, in order to keep the coverage lively. And He would also supply us with some comical dead heats, were it not for the risk of harm to his beloved Creation, as they trip over each other at the finishing line. That we can Know this as Truth is a source of endless consolation to those who pray for the coming of His Performance-enhancing-drug-free Kingdom