An Apology from God … Inspired by Johann Hari 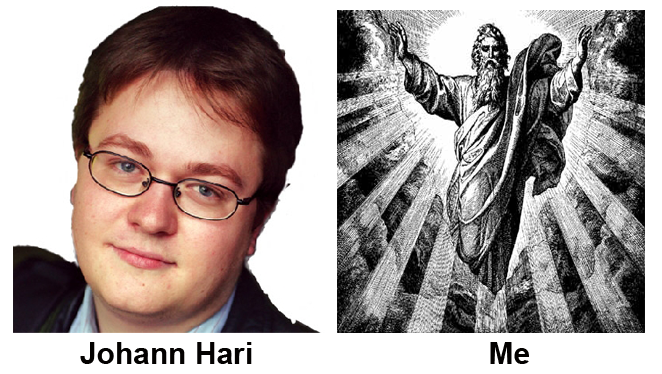 I did two wrong and stupid things.

The first concerns that fact that I have allowed many people to believe that the Bible is my literal word.

When we compiled the bible we found historical accounts that seemed perfectly reasonable at the time they were written, but later didn’t really convey the values we wanted to propagate. Some were quite confusing and unclear. When this happened we simply excluded these accounts from the bible and selected alternative accounts that expressed our current vision for Christianity. At the time I justified this by saying I was giving the clearest possible representation of what the religion should be like.

But I was wrong. A divinely revealed text isn’t a cherry picked selection of man-made narratives and stories to support a particular ideology and currently fashionable set of values. It’s a beautiful articulate and comprehensible celestial dictation of the mind of an all-powerful supernatural entity that transcends current knowledge and confirms subsequently discovered wisdom. If you want to simply compile a canon of man made ideas, histories and laws there are conventions to let you do that. You write, “The best explanation at the time was” rather than “And so it came to pass”, and instead of “Thus said the Lord” you write “So said some bloke or other with voices in his head”.

If I had asked some of the other deities they would have told me how best to chronicle my myths. It was arrogant and stupid of me not to ask.

The other thing I did wrong was that I started to allow religious fundamentalists to create visions of the religion that weren’t my own. Using this fundamentalism I allowed them to try and take out scientific facts that contradicted my revealed word. I allowed fundamentalists to hold views that were divisive and exclusive. I even allowed some of them to say that "I hate fags". I am mortified to have done this because it breaches the most basic humanitarian principles. I appologise to the later group unreservedly and totally.

If it were the other way around – if another deity had been homophobic, attempted to subjugate women or promote dangerous misinformation on sexual health – I’d be withering. I’d say, it’s not hard, stop spreading such divisive misinformation, and don’t threaten disbelievers with eternal torture. Spare me the self-pitying excuses. Plenty of deities have your problems and pressures and none have the amount of followers you do, and they don’t do anything half as awful.

In 2007 I travelled to Lourdes to heal a few believers of cancer. An anonymous claim was made that I had failed to divinely intervene and send the cancer of one pilgrim into remission. However, a Vatican investigation into these claims said that it was a real miracle and that they had photos and everything.

The worst part of this for me has been thinking about the people I have let down. The believers who have prayed to me over the years and told me they love all the stuff I’ve done in the bible. I am sorry that it isn’t all literally true.

But offering words of apology is not enough. So first, even though I stand by my account in Genesis, I am renouncing the geocentric model. I am withdrawing it as an act of contrition for the errors I made elsewhere. But this isn’t much, since it has been abandoned by scientists for years anyway. So second, I am going to take an unpaid leave of absence from the universe, and at my own expense I will be undertaking a programme of deity training. (I created the earth in just six days straight after the big bang). And third, when I return I’ll finally stamp out all wars, poverty and suffering.

Many thanks to Johann for helping me see my own flaws and I would like to apologise again to my believers and the people hurt by my actions. I know that some of you have lost faith in my work. I will do everything I can now to regain it. I hope, after a period of retraining, you will give me the chance.

Blogsitem.info the popularity of blog sites and quality competition. Blogsitem.info directory of your Web site or blog address can join the contest by adding your blog. Win prizes and get involved in the largest blog directory as well. Details about the competition, can be found at Blogsitem.info. Please visit and signup for hits and contest.

Also "cannon". But God's spelling must be correct. He is omniscient after all.