Do You View Religion as a Crutch? 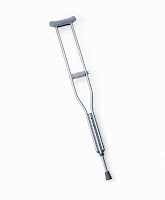 A crutch is a common and familiar metaphor used to describe the comfort and support that religion affords many people. If indeed we view religion as a crutch for these people then it would seem to be to be rather immoral to attempt to kick away the crutches of the needy, simply because we have the freedom to stand up on our own two feet. Surely we would be better employed making sure the next generation are not so crippled during their childhood that they too will require a crutch for the rest of their lives. So lets not make our children God fearing, lets make them life loving. Let’s not segregate their education in faith schools based on the arbitrary beliefs of their parents lets oppose religious apartheid. Let’s encourage our kids to think for themselves and grow up to stand tall without reliance on myth and superstition.
Posted by Crispian Jago at Thursday, July 23, 2009

Email ThisBlogThis!Share to TwitterShare to FacebookShare to Pinterest
Labels: Religion