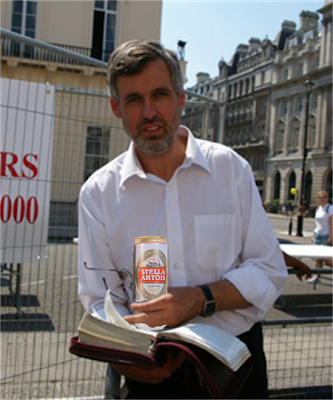 Thus far I have resisted the temptation to blog too much about Stephen Green, head fruitcake at the UK's very own fundamentalist conservative Christian pressure group. I always felt that mocking the poor fool would feel too much like just picking on a mentally retarded child. But after yesteray's sad but entirely unsurprising allegations in the Daily Mail, I thought I'd look into the case a bit more.

Reports that Stephen "planned to make a piece of wood into a sort of witches broom" for the specific purpose of beating his wife, and that he had "hit her until she bled" don't sound overly positive for Stephen. But lets ignore the rhetoric and spin of the Daily Mail and take a look at it from his side, and more importantly let's take some advice from the good book.

Lets start with Ephesians 5:22-24 (from the King James Version)

This biblical wisdom unequivocally tells us that Mrs Green should really be submitting herself to her husband's God given authority rather than making all this fuss about it all. In fact, it really was rather naughty of her to speak to the media in the first place, after all it does say in 1 Timothy 2: 11-12 (NIV)

"A woman should learn in quietness and full submission. I do not permit a woman to teach or to assume authority over a man; she must be quiet."

So lets not be too harsh on Stephen, he's just diligently and literally following the teachings in his preferred instruction manual, and who knows, perhaps Christian Voice could even get a sponsorship deal from Stella Artois following all of this unnecessary furore.

POSTSCRIPT:
Bugger, It seems as though my attempted parody is completeley redundant with this advice from a "genuine" Christian website:

“…sometimes in marriage the grave and solemn responsibility to politely tell the wife to be quiet and stay in her place falls upon every husband.

Being fickle and temperamental, women do not always respond to gentle words so at times a swift, backhanded slap across the face must be applied to them. This usually gets their attention and sets order straight.”

While I appreciate that contemporary mores are offended by much in the Bible, I think you'll struggle to find St Paul endorsing wife-beating.

Re: Ephesians - one notes that you've omitted what he has to say about husbands' obligations to their wives. The passage from the letter to Timothy about teaching by women follows on from a discussion of prayer; the context is that of the worshipping community's liturgy, not women teaching more generally. The Catholic Church, to take an example, recognises female saints as "Doctors [teachers] of the Church".

Stephen Green is the type of Christian that atheist polemicists, also given to proof-texting and sloganeering, love. Unfortunate for them that he's not representative of mainstream Christianity (Catholic, Orthodox, or Protestant). You might as well cite Fred Phelps or Terry Jones; these two-bit preachers who run "independent" churches attended by family and a handful of loons get rather more media attention than their ideas or influence warrant.

Finally, "Christwire" is a fairly obvious parody. Try looking at the homepage. Perhaps if you didn't have such a cartoonish (some might say bigoted) vision of Christians, you'd have realised that.

Just FYI, christwire.org is satire. Quite subtle at times, Poe's Law and all that, but definitely satire.

Oh no, Stephen Green isn't representative of the wider Christian community. I didn't realise. Wow, how stupid do I feel now.

BTW, well aware of St Paul's more acceptable views on women. Didn't he have a few thought on homosexuality as well?

Thanks, You'd have though I would have spotted that.

I spoke with God yesterday.... Do you want to know what he told me?

Another fine piece of reporting by the Daily Mail.
"Stephen Green’s monstrous and autocratic behaviour would, in any circumstance, be shocking. But the charge of arrant hypocrisy must be added ... "

I'm sure they must have been consistently critical of Christian Voice over the years, otherwise they wouldn't have the brass neck to accuse SG of hypocisy. Would they?

Damn. You made me read stuff in the Daily Mail. Now I've got to go and bleach my eyeballs.

As I don't currently have a husband would any gentlemen like me to come round and iron their shirts, do the hoovering or scrub the floors on my hands and knees - all in silence, of course? I know my place.