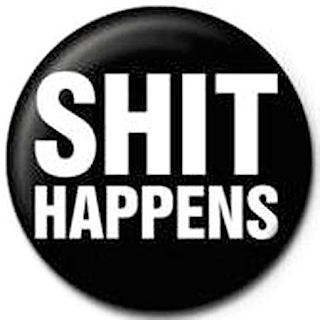 In addition to the Ad hominem logical fallacy, you may well have noticed that I’m also rather found of the reductio ad absurdum. This is perhaps a hang over from my day job where I try and reduce complex IT systems down into discrete functional areas that can be fully exercised across all possible paths.

With this is mind, I shall attempt to argue that the totality of our human irrational beliefs, including all superstitions, pseudosciences, paranormal beliefs, religions and inefficacious alternative therapies can be reduced to a single cause that can be summed up in two short words, shit happens.

Every week people will cross their fingers, touch wood, read a horoscope, pray to an invisible all powerful supernatural being, take a sugar pill, visit a psychic or inexplicably shove a foreign object up their arsehole.

And every week someone will receive a phone call from a friend they were recently thinking of, someone one’s bad back will feel a little better, someone will actually get the job they applied for, someone will meet the person of their dreams and fall in love and someone may well even win the National Lottery. I confidently predict these things will come to pass, because shit really does happen.

It’s easy as an objective observer to look at these events from a distance and sneer at the individual who shoved an onion bhaji up his ring-piece on Friday evening, won the National Lottery on Saturday and then subsequently repeated the ritual each week in his confusion of correlation and causation. But these things happen regularly, and each time a new tedious yet utterly compelling anecdote is born.

Now of course, I’ not really suggesting that the mystical and unmistakably power of shit happening is the source of this wonderment. If this were the case surely science would be investigating this remarkable phenomenon? Well of course it is, it’s just that the mathematicians who are investigating it prefer to refer to it as probability. A science so fascinating, yet utterly counterintuitive that many prefer to reject its logic in favour of an alternative explanation that farts in the face of the laws of nature.

What I suspect is at the root of the remarkable phenomenon of shit happening, is in fact merely an incredibly complex set of variables at play in the natural world. A set of variables so immense that my futile attempts to quantify the possible test paths using the recognised white box testing methodologies of software testing used in my day job, would be wholly inadequate.

Indeed the possible configurations of the natural world as understood by science are so vast that it would be far more surprising if shit didn’t in fact constantly, happen.

So although my hypothesis of shit happening does nothing to explain the real natural cause of seemingly unlikely things, I think it provides a far better fall-back solution whilst we impatiently await science to figure out the specific natural path of the currently pending mysteries. After all, I find it a far more satisfying fall-back than deferring to a singular irrational supernatural excuse.

Shit happens, get used to it.
Posted by Crispian Jago at Sunday, January 23, 2011

cancel skeptical blogging - we have a winner! made me laugh and think, in that order, in equal measure - well said Sir :-)

I've always been a big fan of the "shit happens" explanation, but while reading this it occurred to me that for a complete philosophy I need to add: "good shit also happens". Thank you for helping me solve the mystery of life. I owe you a beer.

Love it. Yes, it really does.

Though on the margins, sometimes we can in fact cause it, so let's not entirely evade responsibility.

Probably not with that bahji thing though.

Dear Shermer... I spoke with God yesterday.... Do you want to know what he told me?

I've never shoved an onion bhaji up my arse, neither have I won the lottery.

Thanks for the tip!

I'll let you know how it goes.

I believe that when you shove an onion bhaji up your arse then a little while later, a shit happens.

Superb post, that pretty much sum's up humanity; a poor grasp of probability

Once you learn about probability the world becomes a completely different place. A bit more lonely too, as you suddenly realise that almost everyone you know has got an insane world view and it makes it a bit harder to relate to them

By the way, I've got a special kind of crystal that defends you from asteroids, I've worn it for 3 days and I've not been hit once. Its yours for only three thousand euros. Its got those mad vibrations