Official Vatican Response to "The Twat in the Hat" 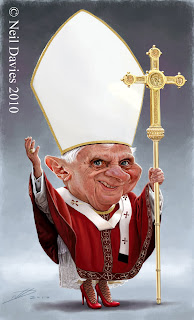 The previous post on this blog featured a poorly illustrated parody of a much loved children’s book.

With the use of badly constructed rhyme and no sense whatsoever of meter, the author attempted to ridicule some of the Catholic beliefs by highlighting his perceived sense of inherent harm in the current Pontiff’s policies as well as pointing out the immoral inhumanity in its past conduct, for which it remains largely unrepentant.

Thanks to the power of modern social networking software, the post was seeded around the internet and brought to the attention of many people culminating in it eventually being posted on the facebook page of the Pope himself.

The Pope was reported to be “disappointed” with the quality of the illustrations and remarked that as a fan of the original book, he was “saddened that the essence of the original graphic style was so weakly reproduced.” However, the Pope was able to see through the low quality illustrations and rhymes and consider the central message within the piece.

Following a period of quiet contemplation over the weekend to review the points made by the piece, the Vatican has finally released this official press statement penned by the Pontiff himself:

Having recently read a parody piece of satire on the Science, Reason and Critical Thinking blog regarding my planned UK visit later this year, a number of points have been brought to my attention which has caused me to revaluate my stance on a number of issues. After much consideration I thought to myself, Hang on Benny, what the fuck were you thinking, this God malarkey doesn’t really add up does it. I mean really, a big fricking sky fairy looking down on us and interfering with stuff, it’s a bit silly really isn’t. I don’t know how I fell for it in the first place.

Following the press statement further investigations have revealed that a significant number of clergy across denominations and faiths had already cottoned on to the fact that they had been duped, but had opted to keep quiet about it in order to retain their careers and comfortable lifestyles in which they have become fully invested.

Although the Pope's sudden realisation that he’d made a bit of a booboo has finally made the news, suspicion really should have been raised during JP2's Papacy when as far back as 1978, during his US tour, Fr Rotten ended his sermon by addressing the following question to the congregation “Ever get the feeling you've been cheated?”

The Pope is currently considering his post faith options, however many pundits are speculating that he may have a lucrative career as an after dinner speaker for major events musing on his past strange beliefs.

Many thanks to Neil Davies who snapped the stunning photograph above of the Pope at the Vatican this weekend.
Posted by Crispian Jago at Monday, March 08, 2010

I've followed your blog for a while now and just want to say that it is getting better and better.

Just in the right place at the right time I guess... :)