Since quickly knocking up and posting the Papal parody job advert last week I've been surprised and delighted to see it popping up all over the interwebs thanks to some kindly tweets and blogs from the likes of Stephen Fry and the friendly Hemant Mehta. 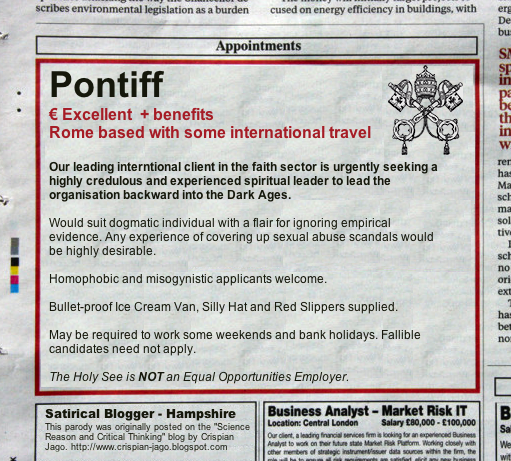 I spotted it again today on Jerry Coyne's blog and when reading through the comments noticed that a helpful pedant had pointed out a gramatical error in the advert. Once I had noticed the error it became extreemly infuriating, so I've had to edit the orginal image to correct it.

I guess it's to late to replace the original image now as it has escaped the confines of my blog, and it's  old news now anyway, but if you do still link to or tweet the image it would be most appreciated if you use the corrected image. Partly so I don't get annoyed every time I re-read my original gramatical cock-up but mainly because I've now stuck my name on it.

Much obliged, Crispian.
Posted by Crispian Jago at Tuesday, February 12, 2013

In order to fill the void in the priesthood after the Pontiff position is filled, perhaps the church can revert to its usual recruitment campaign here: http://shellity.blogspot.com.au/2012/04/recruitment-song.html

Picked up by WEIT!

And "interntional" isn't infuriating you?