Shortlisted for an Ockham 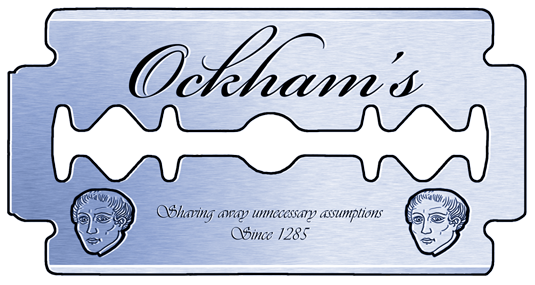 Don't you just hate that sycophantic drivel people come up with when they've been nominated for an award. You know the sort of stuff, "I don't expect to win, but it's a real honour to be shortlisted amongst these other really brilliant people".

What a load of old bollocks.

Anyway, turns out that I've been shortlisted for an Ockham award by the Skeptic Magazine (I should bloody well hope so too, I nominated myself enough times). You wont have heard of the dreary collection of blogs I'm up against. Some ranting liberal biologist with a weird cephalopod fetish, a mob of dissident tarts who whinge a lot, an annoying Scots git who gets other people to write his blog for him and some Irish clever trousers.

Anyway, after being robbed of the Orwell Prize last year, I have taken steps to ensure I triumph over this band of no-hopers. After acquiring his address from a surprisingly helpful PR consultant in Texas with time on his hands, I now have skeptical prodigy Rhys Morgan gagged and tied to a chair in my garage.

So French, Grossman, Ronson, Singh and Wiseman, I have a copy of Stuck in the Middle by Stealers Wheels on my iPod, and I'm not afraid to use it.
Posted by Crispian Jago at Wednesday, February 08, 2012

Email ThisBlogThis!Share to TwitterShare to FacebookShare to Pinterest
Labels: Ockham's

What the... then who's that I've got in my garage?

That's probably why I wasn't short-listed. Might as well send this unknown git home now. I might use DHL, he won't mind at this point.

[Jokes like that are probably another reason I wasn't short-listed. Also, I didn't nominate myself]

Thanks Kylie, but I'm keeping the negatives anyway, just in case.

Oh Crap..I nominated you as I thought this was for "Skeptic most in need of a shave" award

I'll have you know Keir treats us at the 21st floor well. Even got the chains on our desk padded, because they were givin' us sores, and the pus from them kept breaking the computer keyboards. We get nothin' but the finest gruel, too. Sometimes, even get bread! or soup!