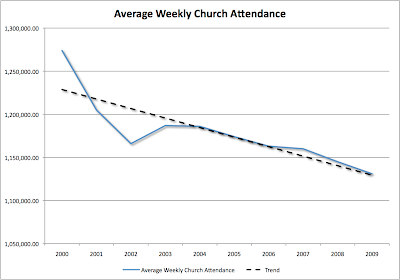 Email ThisBlogThis!Share to TwitterShare to FacebookShare to Pinterest
Labels: Church of England, Religion

There is a real risk to atheists from declining church attendance, the group psychology effect of evaporative cooling: as going to church is no longer seen as a necessary part of membership of polite society, the moderate believers depart, leaving the crazies behind with no voice of reason to slow them down. This is generally when movements get really dangerous!

@JuJu I think that fundamentalists are leaving the church more than moderates, because they think that it is fundamentalism or atheism and as soon as leaving fundamentalism will go directly into atheism.
@Actual Post I recently read a nice book that states that in the 2080s (which he believes will economically be prosperous for good reason) traditional religions will collapse almost entirely simply because of economic prosperity but I find it interesting that it parallels the extrapolation. The book is called "The Next 100 Years", the author is George Friedman. Personally I think that 80 years from now, the church will be a group of moderates meeting once a week at Westminster Abbey, perhaps 1000 people might remain, perhaps 5000 will still allow the church a part in there lives, and about 50000 will say they are part of the Anglican church but not do anything based on that vague relation.

Could you draw the graph again, but showing the y-axis from zero?

I think it gives a more accurate representation of the decline, which is not as dramatic as perhaps suggested.

That may be so, but have you taken into account if other religions are making up the numbers? I would like to see similar graphs of mosque and synagogue attendence.

One reason for the decline that doesn't get mentioned enough is that church services are so staggeringly boring.

A typical CofE service is like sitting through your local amateur dramatic society performance of a preachy Victorian play because you have a friend in the chorus. Even if Christianity weren't declining in Britain, it takes a stiff resolve to keep going to CofE services.

I think JuJu is right to be worried. There's also the fact that the CoE is probably one of the most liberal major churches in the UK. It has some far-out people in it, but in general as an institution, it's pretty laid back. Compare it to the Catholics, or just about any American church.

So I'd be sad to see the CoE go, if it meant the field was left to the real crazies.

@ Society for Fair Representation of Visual Graphs - I'm more concerned that the numbers representing people are given to two decimal places...

The thing I like about this is the fact that Churches close at all.. Not just the fact that some become great cinema's but the obvious business nature of the enterprise.

If a church was truly there to serve the spiritual needs of the congregation then the church would remain open until the last member had left. Instead there's some clerk in an office looking at dwindling attendance and returns and deciding when it's best to pack it up. Which makes perfect sense if it's a Woolworths or BurgerKing but not if it's the "spiritual lifeblood of the community" or something..

And on the stats, this is only a small part of the Anglican church, most of it is in Africa.