Traditional stupidity maintains that a persons destiny may be foretold by the Tarot Cards.

In order to add a small essence of validity to this extraordinary claim, I have tinkered with the traditional tarot deck and created my very own Celebrity Tarot Cards. These can be used to reveal the hidden destinies of the stars. I’ve included some sample readings to get you started. 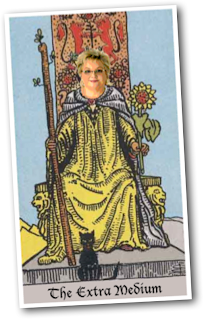 "You have a special gift. A precious and rare talent. Unlike other so called psychics, soothsayers and mediums who use cold reading techniques or the Barnum effect to hoodwink their punters, you are the real deal. Your great courage and strong devotion to your craft allow you to help others contact their loved ones who have sadly passed beyond the gates of death. This is especially valiant as you have reportedly had to concentrate extra hard to hear the spirit voices over the undoubted din of stagehands attempting to electronically relay pertinent information about individuals in the audience to you via a hidden earpiece. It is a true demonstration of your spiritual strength that you are able to cancel out the hubbub of your would-be fraudulent psychic accomplices and tune in to the momentous messages seeping in from the astral plane. The fact that the communication you receive from the other side is indistinguishable from the information transmitted by the stagehands is unequivocal validation of your genius. Such a gift occurs so rarely you should ensure you maximize the total profits from it." 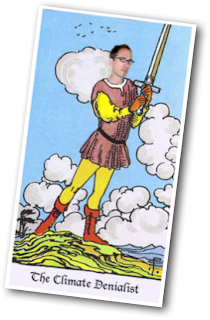 “Science progresses by the challenging of currently held scientific beliefs to adjust, refine and occasionally overturn current thinking. However if your pet climate change hypothesis fails to overturn the scientific consensus of man-made global warning, don’t give up on your discredited hypothesis, after all it’s far more likely that conventional scientists only support the theory of man-made climate change because of their egotistical belief that their generation has the power to wreak environmental disaster. Keep telling yourself this, and keep believing that the evidence is on your side. Although there is of course no need whatsoever to actually read the scientific papers regarding climate change research, it’s not your job to read scientific papers, you should concentrate on simply being an interpreter of interpretations. Keep plugging your theories and the media will be more than happy to give a disproportionate amount of coverage to your dissident theory and thus present the illusion that both sides of the argument carry equal weight.” 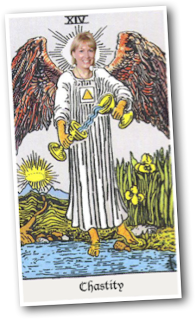 “As you appear to value faith over evidence, why not take advantage of the fact that you are the Conservative MP for Mid-Bedfordshire and join the Science & Technology Parliamentary Select Committee where you could then fail to attend a single meeting. Indeed, why not completely ignore the Science & Technology Select Committee’s conclusion that there is no scientific basis to reduce the upper abortion limit from 24 weeks to 20 weeks and embark on three dubious  attempts to lower the upper abortion limit anyway. In fact, better still, why not insist that those poor misguided Jezebels seeking abortions should first have a good talking to by someone completely impartial, like say, a religious organisation. Oh no, hang on, here’s a good one, how about we simply indoctrinate children with the most effective form of contraception known to man, abstinence. This would save a lot of effort as you would of course only need to teach abstinence to the girls. However whilst zealously defending the right to life remember that the Trident nuclear weapon cannot possible be a weapon of mass destruction.” 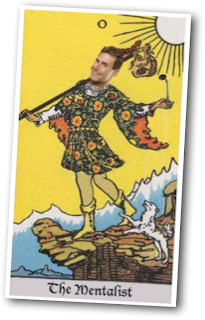 “You possess mystical paranormal powers bestowed upon you by some peculiarly generous passing aliens. Do not allow the fact that all of these mystical powers can be easily replicated by stage magicians performing simple parlor tricks to detract from your original psychic claims. There are simply millions of people ready to proclaim supernatural causes as the only conceivable explanation for deformed tableware. However if people do get a little bored with kinky cutlery and unreliable clocks then why not buy a small Scottish island and dowse for hidden Egyptian treasures brought to the island 3,500 years ago by Tutankhamen’s half sister. It can’t fail. Best to steer clear of predicting sporting events and remember the best place to settle alleged paranormal claims is in the law courts and not the laboratory.” 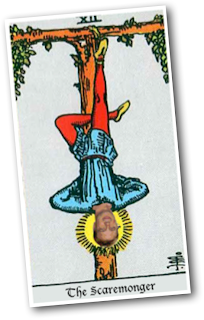 “I think that it would be best if you decided not to disclose the fact that your research that claimed a link between the multiple MMR vaccine and autism was funded by solicitors desperate to find any evidence against vaccine manufactures. It’s probably also not a good idea to mention the fact that you allegedly applied for a patent for a single measles vaccine before starting your campaign against the multiple MMR Vaccine. These sort of unfortunate coincides are bound to result in some interfering old sod jumping to the conclusion that your research was highly biased due to a conflict of interest. However in the extremely unlikely event that most of your co-authors withdraw their support for your research and the General Medical Council bar you from practicing medicine in the UK on 4 counts of dishonesty and 12 counts involving the abuse of developmentally challenged children, do not despair. You can always make a killing in Texas preaching the anti MMR vaccination gospel to the parents of autistic children desperate to latch onto anything they can blame.  Even if your research has been thoroughly discredited and your original articles retracted from the medical journal in which they were originally published in, there’s always hordes of uncritical parents willing to trust their “mommy instinct” rather than investigate real evidence. Although it’s probably best not to dwell too long on the rise in vaccine preventable diseases and fatalities that followed the steep decline in UK vaccination that your campaign induced.”


NB This post is a rewrite of this old chestnut from a few years back.

I'd have pegged Delingpole as the joker and Wakefield the Knave, myself. Wakefield at least achieved something for himself - before it was retracted...

Was looking around your blog. It must be so difficult to inhabit a world in which almost everyone else of your species is irrational and stupid except enlightened, rational, sane YOU.

Most of those who actual ARE in asylums feel the same way.